May 10, 2012 By imcleod in Urban Life and Local Government Tags: Vancouver weather Leave a comment 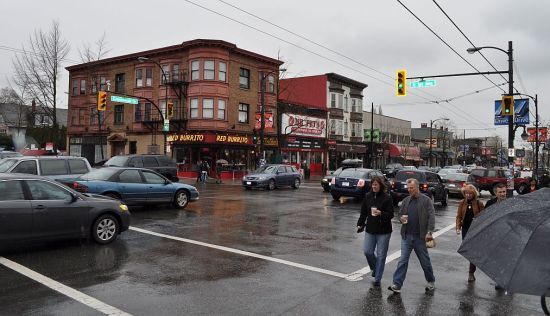 About 10 per cent of visitors to this site come from outside Canada.  Some must wonder at all the photos showing dull or threatening skies.  Why don’t I just wait for a sunny day?

We can go for a month or more in this region without sunny days; Wikipedia, the summit of human intelligence, allows that “Winters in Vancouver can be dark.”  The Government of Canada’s long-term climate records indicate that wherever you go in B.C.’s Lower Mainland, it rains or snows one day in every two; what varies is the intensity of the rain or snow.

At the time this item was posted in May 2012, the Environment Canada website featured a detailed record by meteorologist David Jones called “Weather Winners,” comparing the climates of 100 Canadian cities. This file was later replaced with a simpler graphic array. In the original site, Chilliwack, on the Fraser Valley bottom, was listed as the warmest city of the selected 100, but also the wettest.  Abbotsford, next door, was third warmest, and second wettest.

Vancouver was the second warmest, but only the eighteenth wettest. This ranking suggests that Mr. Jones used numbers from YVR (Vancouver International Airport) in the City of Richmond. The weather along the Pacific shore near the U.S. border is the driest in this region; South Ladner, in the very south, gets “only” 100 centimetres of rain and snow each year, or 40 inches, compared with 81 centimetres in downtown Toronto and 41 at Calgary Airport. Vancouver International Airport gets 120 centimetres.

Move north, over the City of Vancouver, and soon you’re really sloshing around; 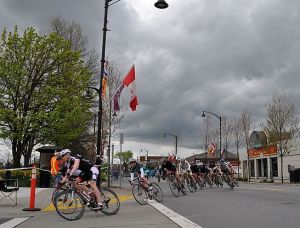 Redondo Drive, in the upper deck of the District of North Vancouver, gets 240 centimetres of annual precipitation, or 94.5 inches. The picture is similar all along the mountain slopes; Port Moody’s Ioco refinery receives something like 203 centimetres of moisture per year, and the UBC Research Forest, up the hill from where I live in Maple Ridge, gets close to 220. This is  significantly wetter than Chilliwack, the wettest among Mr. Jones’ selected cities, where the available record shows 179 centimetres of precipitation each year.

The trees grow tall, the wooden structures rot; and in my view, people become reluctant to plan outdoor activities, and the parks and streets are emptier than they might be otherwise. 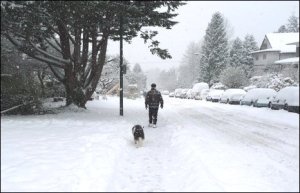 My only further observation in this numerific post is that it snows every winter in Fraseropolis, even at semi-arid YVR.  On the Jones index, Abbotsford rated 44th out of 100 Canadian cities in the frequency of “huge snowfall days”  (over 25 centimetres.)  Cities on the southern prairies, famous for severe winters, get far fewer such events.

If you care to see a serious amateur weather website focused on the Fraser Valley, visit the Abbotsford Weather Page.  The anonymous caretaker says the official sites provide too few details.