This was a very soft launch.

In early December, 2012, the opening of the new Port Mann Bridge received widespread media attention. The opening of the South Fraser Perimeter Road’s eastern section was generally overlooked, although an official media release was slipped on to the government’s website.

The SFPR is part of the same family of roadworks as the Port Mann (it runs underneath the new bridge, as shown above). It’s designed to link the Trans-Canada Highway with Delta Port and the riverside industrial zones of Delta and north Surrey.  I can’t say when the concept was hatched; it was a key ingredient in the government’s road expansion plans when the New Democratic Party managed the province in the 1990s, and I attended an open house in Delta in 2000.  Preparations dragged on, including the environmental assessment, and public resistance grew: the road was seen as a threat to Burns Bog, a sensitive environmental area, and to the Surrey neighbourhoods that look out on the river.  A rally at the East Delta Hall in 2007 might have marked the high point of the protest, although opposition to the SFPR was still seething in 2009 when South Delta voters snubbed both the NDP and the Liberals and elected an independent member of the Legislature, Vicki Huntingdon.

Even so, a part of the four-lane road is now in operation. It starts bravely at the 176 Street exit from the Trans-Canada Highway, but it peters out at Bolivar Park near 136 Street,  five point something  kilometres short of the Pattullo Bridge.  Work on the remainder of the road is moving along; the Ministry of Highways  has set up cameras at six locations to record construction, and stop-action galleries are available online [2016: no longer available.]

Anti-SFPR activists said in December that they would  continue their fight; but judging from mainstream news coverage, the focus of the protesters’ energy has shifted away from the highway, and toward the proposed expansion of Delta Port.

Just as the SFPR’s eastern section opened, the Vancouver Sun carried a story stating that the highway contractor had violated the terms of the project environmental assessment by dumping fill away from the right-of-way.  However, a follow-up staff memo to Delta Municipal Council reported that federal and provincial agencies granted permits to allow the dumping, and that there is no evidence of environmental damage. 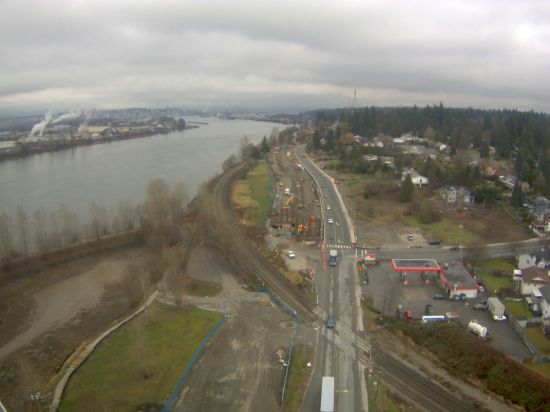