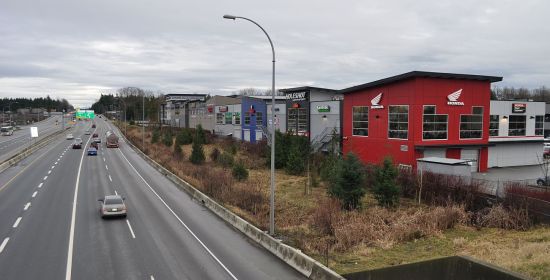 Commercial development, right, is surrounded by components of the 200th Street Interchange

In 1999 or thereabouts, the British Columbia government and Langley Township agreed to locate commercial development within a new Highway 1 interchange at 200th Street, replacing a crumbling structure from the Diefenbaker era. Interchange traffic would be controlled by several sets of traffic signals, a departure from freer-flowing design traditions. 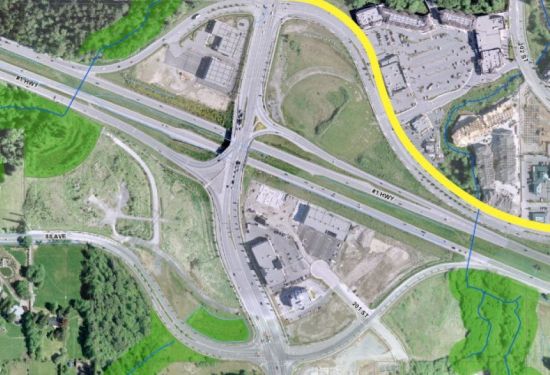 The land use approach and the design were innovations in B.C. In an angry  response, some Langley residents launched a campaign for a “real” interchange without complex internal signals. Voters dumped the mayor who had signed the deal, and a new Township mayor and council worked to frustrate the project.

The incident is absent from the internet aside from odd notations in Township minutes.  I write mostly from memory. I worked at the BC Transportation Financing Authority, a now-defunct agency set up in the mid-’90s to solve a pattern of cost overruns in the highways ministry. One of the TFA’s lesser tasks was to find bits of private funding to support road and interchange projects. There was a shopping mall project at Mission, a golf course project north of Horseshoe Bay, a ski resort project on Vancouver Island. In Langley, the sale of land at Highway 1 and 200th Street was supposed to cut the cost of the interchange replacement  project by $6 million (again, from memory.) 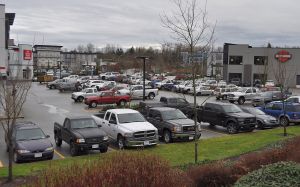 Looking across the southeast freeway island at 200th St.

The mayor who agreed to designate the interchange islands for commercial use was John Scholtens. He and his council allies lost their seats in the election of late 1999. Langley Times editor Frank Bucholz  recalled in March 2011 that while Scholtens’ team “accomplished a great deal…the methods used on many issues turned off voters.”

The new mayor, Kurt Alberts, was an art gallery owner and heritage buff. Municipal staff advised him that freeway island development would hurt plans to attract  commercial investment to other parts of the Township. 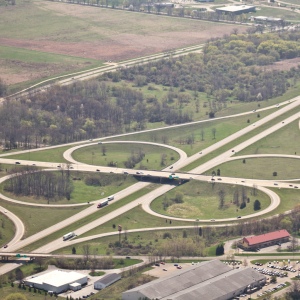 The Committee for a Real Interchange, meanwhile, argued that mixing local commercial traffic into freeway ramps was a recipe for frequent collisions. The interchange signaling system, according to a Kim Richter, a long-time Township councillor, would cause traffic to bog down. “All it will accomplish is idling traffic and increased smog,” she wrote in a blog post that has since disappeared. The B.C. government named an expert panel to review the issue, and the panel reported in 2001 that the design conformed to prevailing standards. This was beside the point; the fact that remained that  Langley was being asked to accept an interchange with three stoplights from north to south, something that would interfere with the North American dream of free-flowing vehicle traffic.

The Township communicated its displeasure, insisted on a redundancy of community meetings and dragged out the re-zoning and permitting processes. The new interchange opened in 2004 (as I recall); more than two years late and well over budget.

Langley’s freeway islands have filled in with retail, office and warehouse uses, although more slowly than originally forecast. Commercial development here is now deemed to be a good thing, not a bad thing, and the creation of automobile oriented commercial complexes along 200th Street is accelerating, along with a rise in traffic volumes.

As for design, the classic cloverleaf is widely considered to be obsolete for urban purposes; inefficient in its use of land, limited in capacity and prone to rollovers. However, if the Province was building the 200th Street Interchange today, it would impose different decisions to speed traffic flow, even at a higher financial cost; the tendency since 2005 has been to remove traffic signals (Pitt River Bridge, Cape Horn Interchange) rather than adding them.

Also, it is unlikely that we will see another interchange with development in the freeway islands — even if developers are prepared to build very close to freeway traffic.

Looking north across undeveloped lands along 88 Avenue to the Colossus Cinema and the Golden Ears peaks. 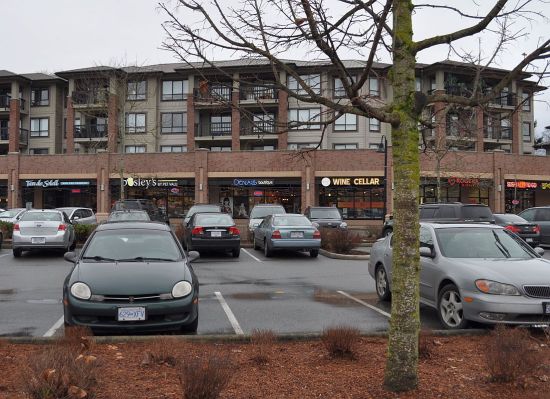