Arizona is a fine place for climate and landscape, but the big-city points of interest are dispersed. Metro Phoenix has a slightly larger population (3.3 million) than Metro Vancouver with 10 times the geographic area. Development rambles across  low-rise, single-use residential and industrial tracts, often walled and sometimes gated in the newer zones, carved up by broad, high-speed arterial roads.

At the historic heart of the region, “downtown Phoenix appeared [in 2012] as one of the top results in a Google search for Arizona ghost towns.” The city government is working to shift this perception, accelerating a long-standing effort to create livable neighbourhoods on the downtown perimeter, especially around Roosevelt Row, a modest cluster of art galleries and cafes. Output from the City includes area design guidelines, the establishment of an Economic Development Commission to build a Roosevelt Row brand, and a survey-based report from the Commission on community priorities. With new housing, a newish rapid transit line with an Arts District stop, and an intensive program of public events, the American Planning Association was moved in 2015 to declare Roosevelt Row one of America’s “great places.” 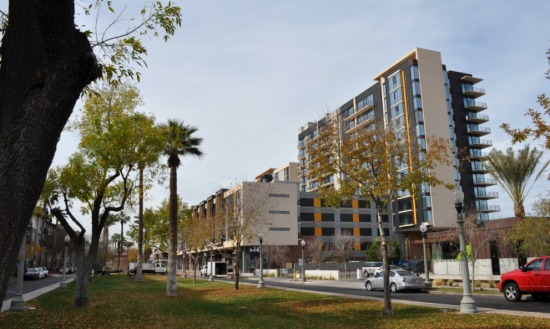 Condos west of Central Ave. This four-block area, with its built-to-sidewalk density, narrow streets and scarcity of parking, comes off as an urban theme park in the sprawling Phoenix context.

Construction at Roosevelt and 4th St. 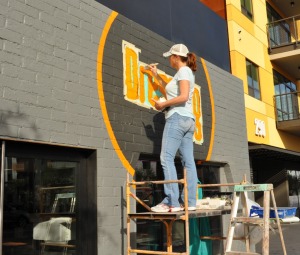 Preparing the facade of a new Roosevelt Ave. bar, “The Dressing Room”. The name refers to the former use of the space as a venue for drag shows.

The new development has already diluted the bohemian flavour that put Roosevelt Row on the map. Our host at Fez, a chic and well-operated cafe (in a new building), said he was “nervous” about where the current transition may lead, while a gallery manager spoke of customer uncertainty and reduced traffic.

A vintage block of shops in the core of the area recently shut down, a longtime coffee house lost its lease in late 2016 and a community arts space is closed, in addition to whatever disappeared under the wrecking ball previously near the crossroads intersection of Roosevelt and 3rd St. However, my co-tourist Vicki McLeod and I also found survivors and upstarts:  some good cafes and bars, three or four galleries, a jazz performance hall, and a government-operated art therapy workshop that is open to the public. And we got the news during our visit that the vintage commercial row will be restored, and the coffee house has found a new home. 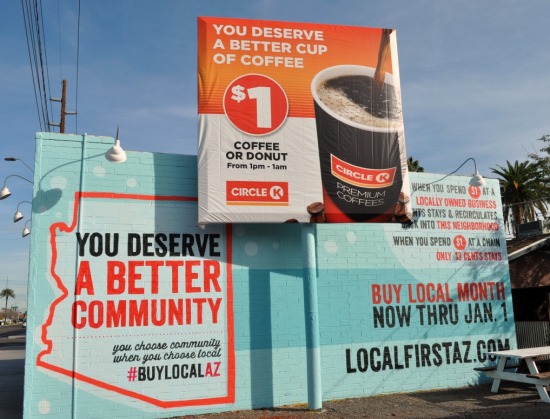 A wall graphic on an established Roosevelt Ave. business urges residents to “buy local”. The message has been pre-empted by Circle K, a chain of 24-hour convenience stores. 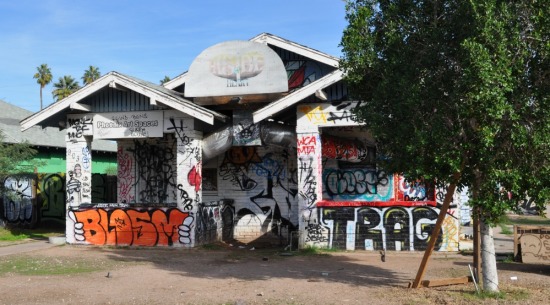 Holding for development: a former arts space at the corner of 4th St. and Garfield Ave. This property overlooks four city blocks that were completely vacant as of January 2017.

Holding for development: a vintage house (1910s?)  near 2nd St. and Portland Ave. 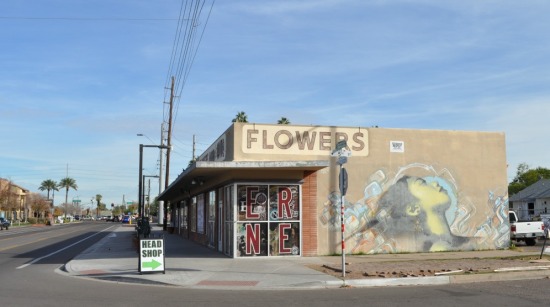 Redevelopment concept for Roosevelt and 5th St., as shown in the Downtown Phoenix Journal,     January 2017

New housing with ground-level commercial at Roosevelt and 3rd St.

The author takes a break

A more tangible issue is the lack of everyday services for people who might want to move into the area. The arts district is a regional tourist destination, a great place to hear street-corner music on Friday evenings, connected by rapid transit to universities and the Phoenix Art Museum. However, it is not yet a complete urban village. There’s a medical clinic in the neighbourhood, and access to lawyers and dentists in the city business district a few blocks to the south. But the 2011 Roosevelt Row design document lists just two everyday commercial outlets active in that year — a dry cleaner and an insurance agent — in the thicket of cafes and graphic design firms. The first priority identified in the 2013 public consultation report is the need for a place to buy milk and vegetables.

The City of Phoenix 2015 development plan makes a strong theoretical case (see page 179) for the creation of livable downtown neighbourhoods to support local business, healthy lifestyles and environmental sustainability. However, it doesn’t plot a course towards making Roosevelt Row a complete, walkable, full-service community. It may be that if more hundreds or thousands of new apartment units come on stream, food stores and personal services will pop up by themselves.

Such a development — a commercial zone built in response to the presence of resident pedestrians — would be a novelty in automobile-dependent Arizona. Or maybe it would rate as just another distinctive feature of this quirky urban area. 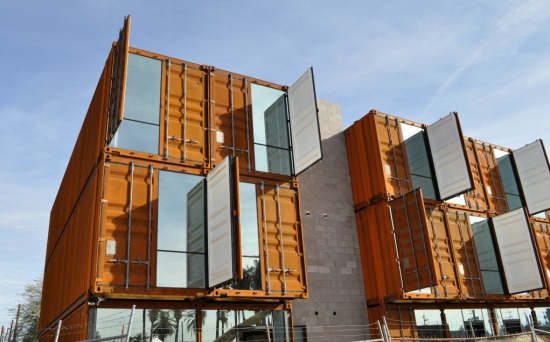 Container housing under construction on 2nd St. in early 2017. “The Oscar”, by StarkJames, was promoted as a residence for artists.