Metro Vancouver’s transportation authority has created a stir with the disclosure that tolling revenues on the Golden Ears Bridge, which have been below expectations since the bridge opened in 2009, are falling even further behind. After hopeful signs in 2012, the public subsidy on the bridge is going up, not down.

This is significant because the Golden Ears is the first modern-era toll bridge in urban British Columbia. The bridge was supposed to introduce a user-pay system for the funding of roads and bridges. END_OF_DOCUMENT_TOKEN_TO_BE_REPLACED 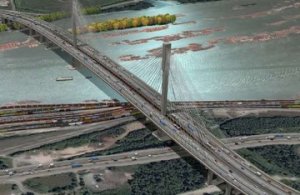 British Columbia Auditor-General John Doyle’s omnibus report on the B.C. government’s reporting practices states that the Port Mann project office (the Transportation Investment Corp.) should not be categorized as a “government business enterprise” since its prospects for profitability are murky. “The financial model developed by the TIC forecasts that it will not be profitable until 2017/18,” says the A-G.  Perhaps more significantly, he adds, the government’s traffic and revenue estimates may be wrong.  The Port Mann project investment, he suggests at the top of his report, should be regarded as taxpayer-supported debt.  END_OF_DOCUMENT_TOKEN_TO_BE_REPLACED