The latest report from Canada Mortgage and Housing Corporation shows that average rents in Metro Vancouver are the highest in Canada, at $1,237 for a two-bedroom suite in a 1990s apartment building.  Vacancy rates in autumn 2011 were low and declining on the west side of the region — 1.2 per cent in Richmond, 0.7 per cent in the City of Vancouver and 0.4 per cent in the District of North Van.

The Metro Vancouver regional authority has warned for somet time that a critical shortage of affordable rental space is  hurting families and contributing to homelessness.  In the 2006 census, 55 per cent of homes in the City of Vancouver were rental properties, and more than 40 per cent in Burnaby, New West and  North Van City.  There’s demand for more units, but they’re not getting built.

“It is estimated that there will be a demand for 6500 rental units per year in Metro Vancouver, with most of this demand coming from households with incomes of less than $45,000. Construction levels of purpose built rental housing have averaged only 600 units per year.”

In 2010, Metro Vancouver orchestrated the creation of a lobby group to push for more rental housing, pulling together tenants, non-profit housing advocates and developers into a Rental Housing Supply Coalition.  This is an unorthodox strategy for a local government, but Metro has few troops of its own on the ground.  The primary target is the Government of Canada; during last spring’s federal election campaign, the Coalition called on federal party leaders to take a stand on rental housing. 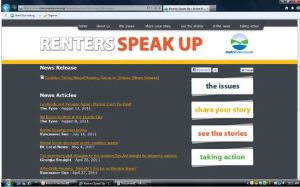 The Coalition appears to have consensus on what’s needed: federal tax changes to improve the profitability of rental housing construction, “such as reinstating the ability to defer capital gains tax upon reinvestment, accelerated depreciation, deducting losses against other income, and permitting GST/HST exemption.”  There’s also a desire to see the federal government return to the social housing field, which it abandoned in the mid-1990s.

In November 2011 the Coalition produced a Rental Housing Charter, for which it claimed scattered national support.

Adequate, safe, secure and affordable rental housing is necessary to attract and retain young people, working families and immigrants, who are essential to a vibrant and sustainable economy;  enable people to work, complete or continue their education and participate in their communities; help individuals and families avoid the need for frequent moves; this continuity helps reduce costs to health care and social services; and give children a better chance to succeed in life by improving achievement in school, making friends and taking part in sports and other activities.

The partners in this B.C. lobby deserve high marks for providing mutual support through conference presentations, blog postings and other channels.  The consensus on the key message — get tax changes from Ottawa to make housing construction more profitable — is remarkable, given the suspicion or hostility towards developers in many segments of B.C. public opinion.

However, the challenges related to influencing Ottawa’s agenda are notoriously difficult.  Housing is a key issue in Metro Vancouver, but it does not normally poll as a vote-determining issue in most parts of Canada.  Even in this region, the severity of the rental housing shortage varies, with CMHC reporting vacancy rates at 3.7 per cent in Surrey, 4.0 per cent in the north Fraser and 6.7 per cent in Abbotsford, on the region’s doorstep.  Rents for two-bedroom apartments in all those places average less than $900.  The level of municipal interest in affordable housing is correspondingly uneven, despite Metro’s affordable housing strategy.  Metro’s rental coalition has done good work so far, but it has much work to build alliances and public support at the local and national levels before a conservative government in Ottawa takes notice.