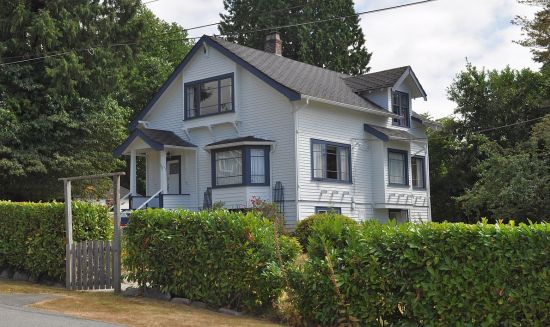 In the fall of 2012 we looked at “speculation and stagnation” in the real estate market in British Columbia’s Lower Mainland.

Since then, the outlook has changed. Prices have increased significantly in the detached-home market, and a declining trend in apartment prices has been reversed in many communities.

The tolerance for very high house prices has moved well beyond the City of Vancouver. As I write this, the Canadian Real Estate Association shows the average home price in Calgary for January 2014 at $444,000, compared with $348,000 in Ottawa. (It’s clear here that “home” = “detached house.”) Lower Mainland figures show the benchmark detached home price in February 2014 was about $950,000 on the North Shore, $935,000 in Richmond and $870,000 in White Rock.

Why do house prices continue to move up in the Lower Mainland? There’s no consensus. In fact, there’s a persistent view that Vancouver-area prices are simply crazy and must collapse  soon. Short of that, some argue that prices are driven by speculative investment from China and the oil economies; even though, anecdotally,  many local people have significant equity and many are prepared to pool savings with  extended family members to acquire additional houses. Prices may also reflect constraints on supply, in terms of both geography (mountains, water) and the zoning rules that protect green space and farmland.

Apartments are a different matter, although purchasing an apartment may still pose a challenge for the first-time buyer. When I was a kid in the ’60s, home buyers were advised to limit their mortgage to a maximum of two and half times their annual  household income. Using this conservative guideline, and supposing a 20 per cent down payment, a household would want an annual income of $80,000 to purchase the benchmark apartment in Coquitlam, and $112,000 in North Vancouver.

Apartment prices continue to sink in Squamish and Whistler, where there was considerable apartment supply created for the 2010 Winter Olympic Games. Apartment values are also declining to remarkably low levels in Abbotsford, a large but transit-stranded city in the Fraser Valley.

The figures are compiled by the Greater Vancouver Real Estate Board and the Fraser Valley Real Estate Board. The list of communities is presented here in order of price increases for detached homes over the past five years. 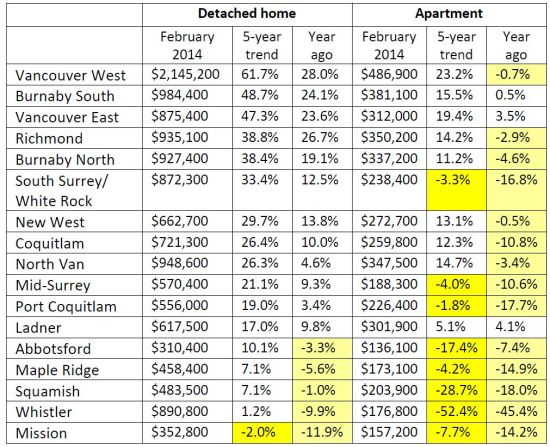