If you decide to live in British Columbia’s Lower Mainland, you may as well orient yourself to water or mountains.

You might choose the old fishing village of Ladner, in the south part of the municipality of Delta, because the weather is relatively dry (despite the snow on the day we visited.) Or because residents have worked to develop a prosperous, safe sense of community.

South Delta — basically Ladner and Tsawwassen, another urban village down the road — declared sovereignity-association in the 2009  B.C. election, choosing an independent representative to focus on local priorities rather than aligning with a provincial political party. This independent member of the legislature was re-elected in 2013.

The area is under intense industrial development pressure because it’s home to a massive container port facility. South Delta residents (in my reading of the situation) would like to manage the trick of obtaining big-city services (a quicker highway commute to Richmond and Vancouver, better transit, a full-service hospital) while resisting industrial and big-box development.

Medium-density housing overlooking the marina, Ladner. Mr. Smarz was moved to ask, “Who designs this stuff?”

To its credit, the Delta local government has developed a village core with a rare degree of integrity and charm, balancing this against supermarkets and other car-dependent chain stores within a couple of hundred metres. By the look of it, professionals of various kinds have been moved to set up shop in the village rather than commuting to bigger places. The aesthetic of the medium-density housing in the perimeter is spotty, but there is a considerable supply. 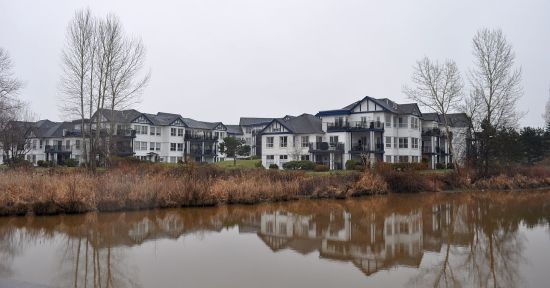 Much of the designated Ladner planning area is single-family housing outside the walkable village. My friend Robert Smarz and I kept fairly close to the core, with a brief look at the duelling malls (Safeway vs. Save-On) on the Ladner Trunk Road approach.  The weather was lousy, but we saw what there was to see. I’ll return with Vicki in the summer for the Sunday street market. Bob and I ate lunch and  consumed excellent craft beers at  Sharkey’s by the municipal dock. 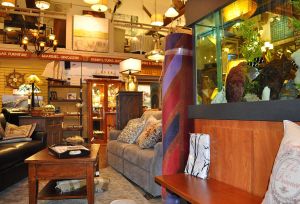 A 2011 municipal rezoning is intended to make Ladner’s waterfront a more robust extension of the village core. Since the plan was adopted, a large and eclectic furniture and collectibles store has moved from the east side of the village to a former float-plane hangar across from the harbour. This may be a positive sign.

We spoke with Jeremy, a young server at Sharkey’s, who said he grew up in Ladner and is proud of his community. He said it’s a great place for seniors. But he said, a little sadly perhaps, that there’s not much for college-age young people, a significant demographic in South Delta. He suggested that Fraseropolis should keep this age group in mind when we report on urban villages.

Jeremy said there is anxiety in Ladner, as in Tsawwassen, about major development on the territory of the Tsawwassen First Nation. This pending development is slated to include a Walmart and a large casino, and some residents are concerned about the potential for negative effects both social and economic.