Dianne Watts, the mayor of the City of Surrey since 2005, has brought a level of logic and discipline to her job that was lacking under her predecessor. 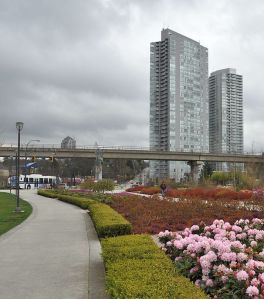 It’s interesting, then, to consider the logic behind Surrey Central, perhaps Ms. Watts’ pet project.  This burgeoning development combines civic functions, commercial expansion and residential towers, organized around the Surrey Central and King George rapid transit stations. Built in the middle of a neighbourhood that has struggled with crime and social issues, Surrey Central goes beyond the standard suburban facelift. It’s an attempt to build a commercial, civic and cultural hub worthy of a Great City.

Surrey is the second-largest city in British Columbia, with an estimated  population of 510,000.  Surrey Central alone is forecast to add more than 35,000 people by 2031, from a current total of about 30,000. To help fuel growth in the area, Mayor Watts recently moved City  headquarters from a nondescript residential-area location to a $100 million building on 104 Avenue. A new library has opened next door, and a performing arts centre is in the plans. 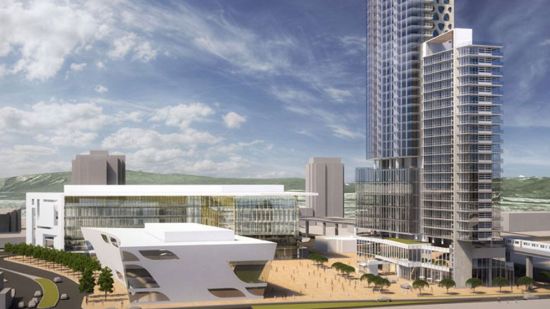 From a City of Surrey handout dated 2010. The new library is shown in the foreground, the City Hall behind; as-yet-unbuilt towers to the right, and a public square (busy, yet not crowded) in the middle.

Two blocks from the new City Hall, Simon Fraser University and the regional 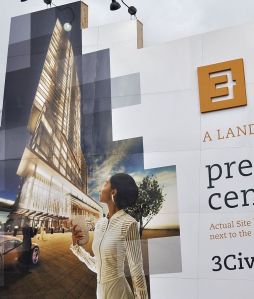 health authority have taken co-occupancy of a large tower. The provincial offices of the Royal Canadian Mounted Police have moved into the area. Surrey Memorial Hospital, on the southern edge of the precinct, is rapidly adding new services. My co-tourist Robert Smarz and I counted seven or eight apartment towers under construction. The scale of activity is too dispersed to capture in photographs. “This is just the beginning,” said Mr. Smarz. “This is your next Metrotown.”

Metrotown? Burnaby’s megamall-dominated, rapid-transit-oriented, high-density precinct has already attracted people in large numbers, and it’s still expanding. Surrey appears to be striving for something with a stronger sense of organization. However, there’s a risk we’ll end up with a result in Surrey that is just BIG.

Journalist and blogger Frances Bula reported on the challenges facing “Surrey’s new downtown” in February 2014; in the comments thread attached to her post, local blogster Voony made a reference to “urbanisme sur dalle”, a style of development spawned in Europe in the 1960s. A literal translation of the phrase is “urbanism on a slab.” “Urbanism above the street” is probably better, suggesting a disconnect between the architectural mass and everything that surrounds it. An often-cited example is La Defense, a suburban government precinct visible from the Eiffel Tower. 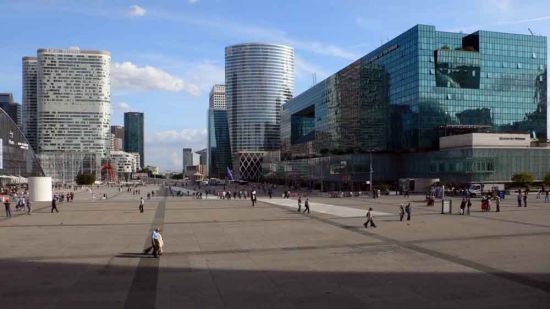 The truth is that given the volumes of traffic on the main highway, King George Boulevard, this will never be a cozy urban village. In fact, King George near 104 is one of the most dangerous stretches of road in B.C., for motorists and pedestrians. Leaving aside the “Great City” ambitions, Surrey Central will succeed in its own terms if the city government can reduce the number of vehicle-related crashes; build a sense of safety and security for residents; and facilitate diversified commercial growth, both to improve the local job market and top up the City’s revenues. 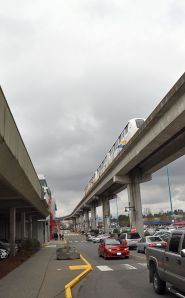 Our own walk began at the King George entrance to Holland Park, carefully designed and landscaped but sparsely visited on a cloudy Saturday morning. The park faces the butt end of the precinct’s commercial centrepiece, the Central City Shopping Centre. The most obvious pedestrian route from the park to the university and City Hall bisects mall property. Much of this route runs beneath the Skytrain public transit guideway, as shown in the photo here.

The rapid transit line, which originates near the hospital, runs through New West and Burnaby to downtown Vancouver. It opened in 1986 and is now marked by clusters of high-density residential and commercial development such a Metrotown. Skytrain is heavily used, moving my companion Mr. Smarz to ask: “How do they expect to get all these extra people on to the train?” One solution, would be to run more trains; another would be to build more rapid transit lines; but we shall see.

North and east of the shopping centre, on 135 Street, on King George Boulevard and beyond 104 Avenue, many properties appear to be awaiting development. The “For Lease” signs and empty shopfronts create a forlorn air in places. The cinderblock roller rink and the Fresgo Inn, a cafeteria-style diner, are local institutions of a sort; having sampled the air in the first and the food in the second, I’ll venture that both have  outlasted their recommended shelf life. In future, instead of such local colour, we’ll see bigger, denser development that local government envisions as “truly livable and modern”; judging by the current pace of construction, the day is coming quickly.

The library seen from University drive, with City Hall behind