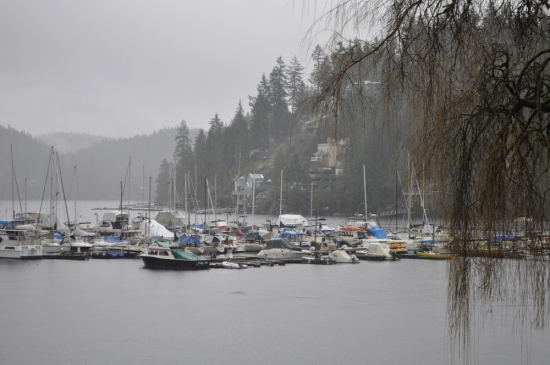 Deep Cove, a part of North Vancouver lying next to the wilderness, offers access to hiking, cycling, water sports and civilized cafes. It draws visitors in large numbers from other cities in Greater Vancouver, across Canada and beyond.

When co-tourist Bob Smarz and I visited on a rainy Saturday in February, Honey’s Doughnuts on Gallant Avenue was packed, but traffic on the footpaths and bridges was sparse. We didn’t linger over taking photos in the downpour, but Deep Cove looked to be a fine place for a day out, with stunning ocean views, parks and trails in every direction, and a cute row of cafes and galleries. It sits at the base of Mount Seymour, and even at sea level it has an alpine feel, albeit with a strong dose of 1960s suburbia.

The homes range from modest to spectacular, and we met recent arrivals and people who had moved in 50 years ago, all enthusiastic supporters of Deep Cove. However, we also learned that the area enters a parking crisis each summer. The District of North Van, population 85,000 published a parking plan for Deep Cove in May 2015 after extensive technical study and public consultation. Simon Fraser University was called in to facilitate a dialogue, and residents, visitors and business operators were surveyed. The residents complained about unsafe streets, a loss of access to their properties, and the fact that “their guests and, to a lesser extent, their household members, cannot park on their street.”

Of the 140 people who participated in the dialogue, 18 live beyond Deep Cove on Indian Arm, and have access to their homes only by boat. They leave an average of 1.86 vehicles parked in paid lots or on Deep Cove streets while they enjoy nature  at their cabins. The dialogue report noted that at least some of these people view free on-street parking as part of their entitlement as taxpayers.

The final “plan” is more like an options paper. It suggests possibilities such as the introduction of pay parking, stricter parking enforcement and the creation of additional parking lots, but the balance that has yet to be worked out. 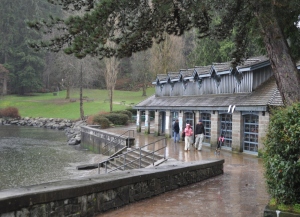 The Deep Cove rowing club in the winter rain, with a municipal park behind

There is no pub in Deep Cove, so we were forced (!) to drive back along Deep Cove Road to the corner of Mount Seymour the short distance. Our previous pub experiences on Vancouver’s West Broadway and in central Surrey were disappointing, but I am happy to recommend The Raven in North Vancouver.

An aerial photo of Deep Cove from the municipal technical study, showing the large amount of land dedicated to municipal parks. The commercial row is to the left of the Deep Cove marina.