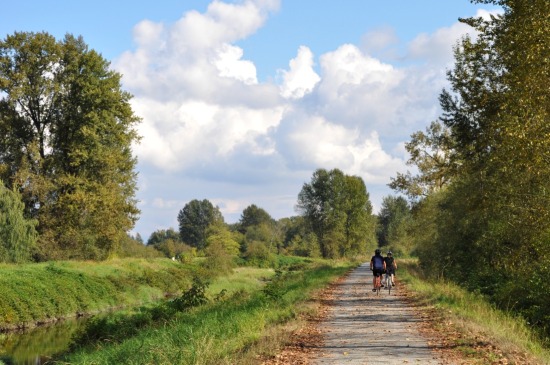 As an easy but interesting and varied urban bike trail, the Traboulay-PoCo Trail in Port Coquitlam measures up to anything I’ve experienced in Canada. This 25-kilometre loop passes alongside five different bodies of water. It’s virtually 100 per cent separated from traffic, with only occasional road crossings.

I was reminded of this route when I purchased a book called Easy Cycling Around Vancouver  as part of a plan to spend more time on my bike. None of the trails in the book are in Vancouver, if that matters; they’re all in the suburbs or beyond. The mountains, rivers and inlets that carve up our region are a barrier to car commuting, but they’ve helped planners and local governments build a remarkable inventory of recreational multi-use trails for the use of residents and visitors. Suburban cities like Port Coquitlam are working hard to make their downtown villages complete and attractive; a facility like the PoCo Trail connects neighbourhoods with the downtown, and puts the outdoors at the doorstep of downtown residents. 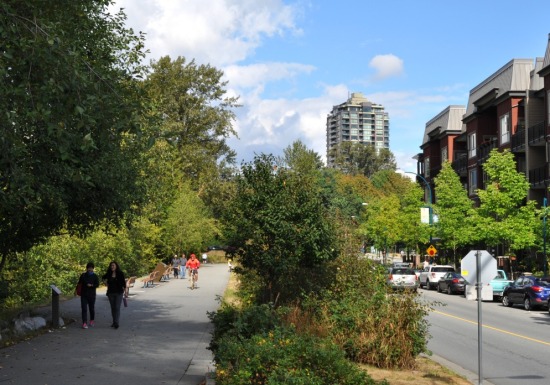 At the edge of downtown PoCo

Along the Coquitlam River north of Lougheed Highway

The book advises that the PoCo loop will take most riders 3 to 4 hours. For me, as a none-too-fit older guy, the travel time was 2 hours including photo stops, plus the 90 minutes from my home to the trail and back. The going is flat, and the route is clear, except at the three-way intersection just east of Coast Meridian Road. Consult Google if you must; the map in Easy Cycling is confusing at this point.

For a more thorough description of this ride, you can check the Average Joe Cyclist site, which features numerous posts on cycling in B.C. and elsewhere, and on topics of interest to average folks who like to ride.

The Traboulay PoCo Trail (named for the late Mayor Len Traboulay) obviously represents a considerable investment by local taxpayers, but I don’t find an estimate of the total cost on the City website. The 2013-2017 municipal financial document promises $131,500 as an annual amount for “Trail Construction and Upgrades”, or something over 1 per cent of Port Coquitlam’s annual capital budget. For whatever reason, this line is missing from the 2015-2019 plan, although there’s a special $41,500 capital spending entry for asphalt repairs on the Traboulay Trail. Public accounting for cycling infrastructure spending in B.C. is kind of a mess. It’s a question I’d like to return to in a future post.

Near the Pitt River 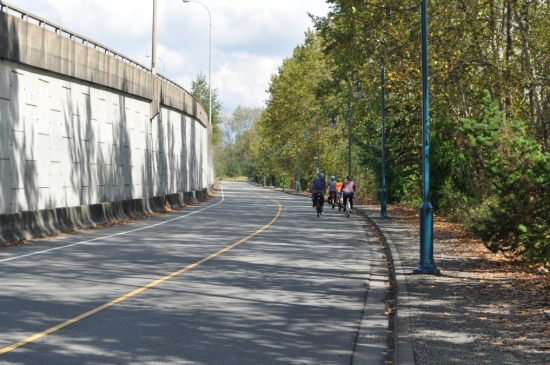 Argue Street, closed to through vehicle traffic, under the embankment of provincial highway 7B. The Fraser River is on the right. 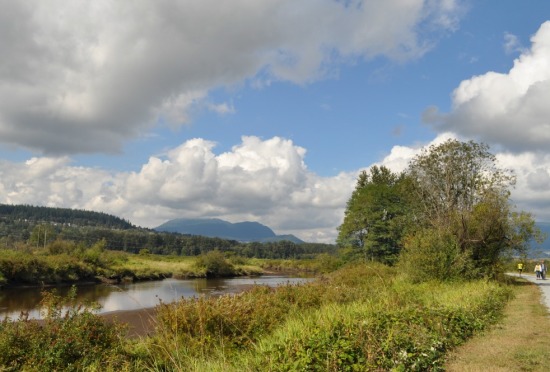 Coquitlam River, on the territory of the Kwikwetlem First Nation