About 10 years ago, the term “Retrofitting Suburbia” came to describe the art or science of converting automobile-dependent sprawl into liveable urban landscape.

Coincidentally or not, it’s about 10 years since then-Mayor Dianne Watts announced her vision of a City of Surrey downtown, a focus for Surrey’s hodge-podge of malls and paved-over farmland. Simon Fraser University and the Fraser Health Authority had just moved to a new Surrey Central tower close to rapid transit; the City has since add a civic plaza with a City Hall. Residential and business towers are springing up close by.

Blogger Stephen Hallingham’s Urban Surrey site recently provided an optimistic forecast for Central Surrey development.  “In fact, 2018 could prove to be another record year for construction starts and rising property values, with up to 10 new towers starting, in addition to a number of 5-6 storey projects, new parks, roads, and the Surrey Central Skytrain expansion.”

A recent photo of the civic plaza area with City Hall at the centre, from the Urban Surrey blog site. The tower on the right includes a hotel and a campus of Kwantlen Polytechnical University.

Surrey’s 2017 City Centre plan contemplates a downtown that is “interesting, unique and memorable.” Apartment units here cost less than in Vancouver, and they’re attracting working people aged 20-35. But looking at Surrey as a whole, with its mushrooming population of 525,000, it seems the Centre is growing more slowly than expected. Globe and Mail reporter Frances Bula recently updated an overview piece on Surrey Central. Her quote from Paul Hillsdon, a Surrey Central resident and blogger, indicates that this collection of structures is not yet a cool place to live.

“It’s very different than an actual urban setting,” says Mr. Hillsdon, now living in one of the four Concord towers near the King George SkyTrain station, the second cluster of downtown-like density that has emerged in the last five years. “One of the biggest pieces that’s missing is just things to do, places to go.” There is the Central City Brewpub in the Simon Fraser tower in one direction, a Browns Social House in another, but it’s a long hike down a busy street and many parking lots to get to either. 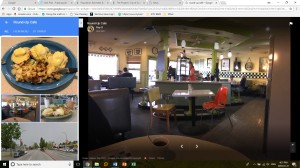 2017 photo data on the Round-Up Cafe from Google Maps

As Bula’s article notes, the Surrey Central core is tightly defined, with deteriorating vintage properties crowding in at the edges on the north and northeast. This jumped out at me during a walk with co-tourist David Plug, after a breakfast at the Round-Up Cafe, a block or two from City Hall on King George Boulevard.

We walked through the civic plaza, past the tower projects on University, alongside a modest 1970s-era mall, and across King George to vast parking lots and big box stores on Whalley Boulevard — put together, an automobile-ridden aesthetic jumble. Before 2010, development here was willy-nilly; with the new area plan, construction will conform to a pattern,  linked to the evolution of a wider Surrey Centre zone made up of six mixed-use districts and five residential districts.

It’s nice that Surrey Council and planners are thinking for the long term. However, the City Centre concept is so vast, and so radical in terms of tearing out existing uses, that it may grind along for 30 years as a raw, noisy work in progress. I have trouble defining this as “retrofitting”, something that always imagined would be done for the benefit of the resident population. In this case, the resident population is being replaced in favour of a hypothetical incoming market.

The foreseeable effects on Surrey in the short term go like this. First, the independent businesses currently clustered along King George Boulevard will be largely swept away. The Round-Up cafe dates from perhaps the 1920s; David Plug, a volunteer on the City’s heritage committee, says the Round-Up has been selected as a heritage site, so the sloping floors and the smell of coffee and sausages may be with us for a while. Other operations, fulfilling a wide range of local needs, do not enjoy such status.

Second, low-income people who have owned or rented that houses and apartments around the Surrey Central core will be expropriated or evicted. Some are addicts or bad characters, no doubt, in a neighbourhood with a reputation as a crime-ridden slum. Most of them, of course, are just folks. Judging from Burnaby’s Metrotown example, the clearance of older properties will create hardship for long-term residents. They will be forced to seek accommodation somewhere else in an increasingly unaffordable region. As I write this, a UK consultancy called Demographia has released a report listing Vancouver as the third most unaffordable housing market in the world. 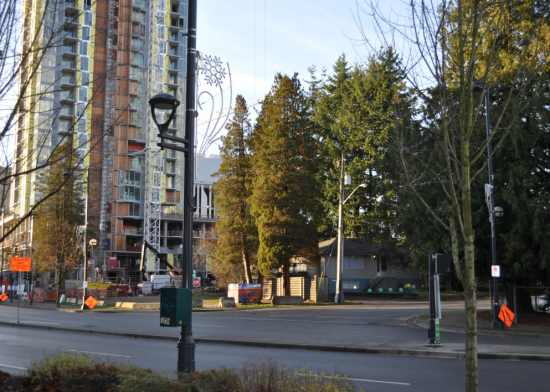 Detail from the facade of the Simon Fraser University Environmental Engineering building, under construction

Abdandoned retail space across the street from Surrey City Hall 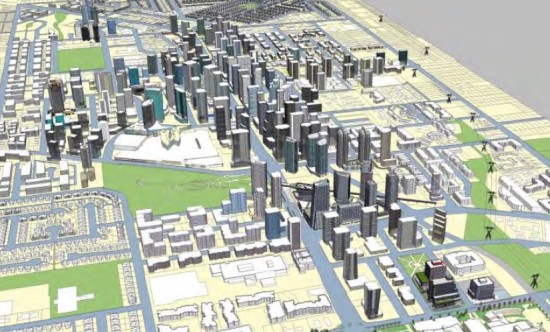 A rendering of the future Surrey Central core from the 2017 plan, with towers distributed along King George from 96 Avenue, lower right, to 108 Avenue.