Vancouver City Council voted in November 2017 to seek World Heritage Site status for the Chinatown district. This founding neighbourhood began as a segregated zone for Chinese-speaking labourers and merchants outside the railway and lumber camp that covered today’s Waterfront and Gastown areas.  It functioned for many decades as a commercial and cultural hub for Chinese-speaking immigrants, and takes a prominent place in the modern English-language literature of  the Chinese-Canadian community. The retail hub, it should be said, has been supported by apartment housing, Chinese seniors’ housing and small-lot detached housing, either in the core or in the old Strathcona neighbourhood to the east.

The erosion of traditional Chinatown and the response from local government raise questions about the long-term livability of Vancouver as a whole. When real estate values have gone beyond what wage earners can afford, and rents are headed in the same direction, what can anyone do to keep Vancouver real? Will people continue to raise children in Vancouver, and age in place, or will it become a barracks for the affluent end of the global workforce?

In major cities around the world, rooted communities are giving way to the transient and the precarious. Perhaps the worst example is Paris, where the tide of tourists, foreign students and transient tech workers are turning the city into a Disneyfied parody of itself. The architecture and monuments survive, but the family-run service businesses are dying. As I was preparing this post, Canada’s national housing agency reported that the number of non-permanent residents in Canada doubled from 2003 to 2015, with a heavy focus on Toronto and Vancouver. Non-permanent residents accounted for an estimated 20 per cent of Vancouver’s population growth during this period.

For Vancouver’s Chinatown, recognition from UNESCO would represent a symbolic declaration of the area’s historic significance, but it could take up to 10 years to take effect. By that time, the traditional character of this urban village may have faded altogether.

Our friend Lawrence Wang grew up in the Metro Vancouver suburb of Port Moody. His immigrant parents brought him to Chinatown on Saturdays during the 1980s to visit the shops and social centres. By his estimate, half the Chinese storefronts have disappeared since he was a child — bakeries, meat and poultry outlets, herbalists and Chinese cafes.

Lawrence was my tour guide on a recent walk through Chinatown and Strathcona. To my eye, there are more exotic food stalls here than anywhere else in Canada, but Lawrence says the market for traditional wares is dying away. The 2016 census shows 385,000 people speaking Chinese languages in Greater Vancouver, or 15 per cent of the population; recent immigrants shop at Asian supermarkets such as T&T, and at Asian malls in Richmond and Burnaby, and so do the sons and daughters of the people who used to make the trek into Chinatown. Lawrence and I saw a few Asian families, young moms and dads with kids in strollers; he said he was surprised to see even this remnant of interest.

Local merchants and the City have tracked this decline for a decade or more. The City’s 2012 Chinatown revitalization strategy talks about commercial tenant recruitment and retention. Local government has taken steps to preserve the scattered quality structures in the area and restrict redevelopment in the Chinatown core to a small scale. 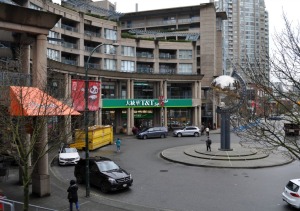 At the western perimeter: the high-rise “International Village,” showing an Asian supermarket.

The more typical strategy for saving shopfront small business is to create high-density housing around the perimeter. This is happening, and more is contemplated in the City’s Downtown Eastside Plan, including a generous share of subsidized housing. But most newcomers to the DTE are seeking affordable housing close to transit and work, rather than exotic foods and herbs. The retail trend is to a hipsterish mix of coffee shops, travel agents and snowboard vendors. Lawrence and I had our lunch at the Ramen Butcher, a fashionable Japanese cafe, for lack of a Chinese option.

On February 13, 2018, Vancouver City Council adopted a final version of the Northeast False Creek Plan, with provision for thousands of new housing units. This is the wasteland bordering Chinatown on the south. It is the site of Vancouver’s midget freeway that I reported on in 2017. Chinatown spokesperson Henry Yu, one of the activists behind the UNESCO concept, complained that Council had ignored Chinatown’s interest in its planning, and that the new development will do nothing to support the survival of Chinatown.

At this point, with some regret, I have to question the benefit of the UNESCO designation idea. One of the main anticipated effects would be to bring more  tourists to Chinatown. Is this wise? Once again: mass tourism is a voracious beast that eats what it loves. The once-charming Latin Quarter in Paris no longer exists; the oldest quarter of Amsterdam has likewise become a hodge-podge of burger joints, Irish pubs and sushi.

Here’s a prediction, or a hunch, coming from a non-resident with no Asian background. First, we will see a continued dwindling away of the family-run Chinese businesses in Chinatown. Second, if things go well, we will see the evolution of a high-density urban village where residents can walk to most retail and professional services, and where enough people establish long-term residency that there is some sense of community. It will be not much different from nearby Yaletown or Coal Harbour, except that some of the lettering on the banks will be Chinese. The Chinatown core — three blocks of Pender and Keefer, one block of Georgia — will be a medium density zone mixing high-end professional services and boutique retail, or alternatively a zone of tourist bars and cafes.

Mr. Wang and the Hakka Association

Our walk into the Strathcona residential neighbourhood, with its mix of Chinese, Indigenous and boho European residents, took us past the headquarters of the Hakka Association. Lawrence said, “The Hakka are my clan,” but it’s more complicated than that. He later provided a video link for background. He doesn’t go to the Association building any more, but he has a big Hakka family scattered around the world — for example his Hakka in-laws in Hyderabad, India.

Lawrence and his wife live in Coquitlam, and we took the Skytrain together for our Saturday trip into the city. He told me about his work as an English-language consultant for an Indian film company — probably something to do with his uncle’s Chinese restaurant business, also in India, but I didn’t ask. The Hakka people, according to the video, are adaptable and practical. 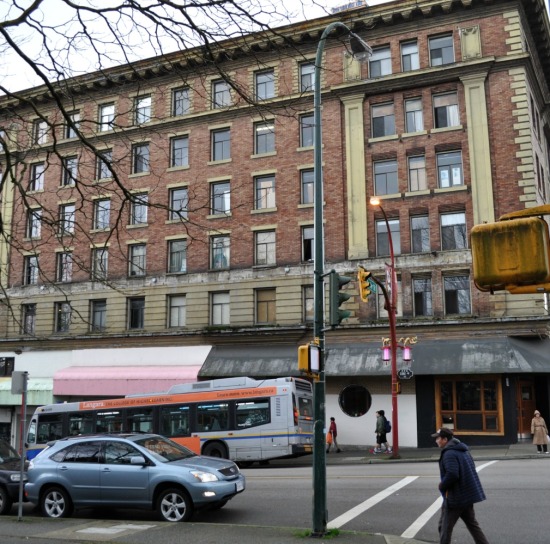 The Fan Tower at Gore and Keefer, where Lawrence’s aunt lived in the 1970s.

A small temple, genre unknown (to us), on Keefer Street at the transition from Chinatown to Strathcona