Tower construction seen from alongside the proposed new development on 104 Avenue, Surrey

I recently joined our friend David Plug on a real estate investors’ bus tour around Surrey Central. The tour’s purpose was to encourage passengers to commit at least $25,000 in financing for a proposed apartment housing complex. 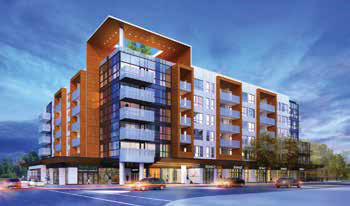 With a large number of smallish investments, the development company hopes to raise at least $7.5 million, a big chunk of the estimated $13.5 million cost of purchasing land. The project prospectus lays out three scenarios. In the minimum scenario, under present City of Surrey zoning, the builders would construct 210 units in a 6-storey wood-frame complex; with revised zoning, they might achieve 359 units, and a higher rate of return to investors.

Negotiations on the hoped-for property, 800 metres from the Surrey Central SkyTrain station, were still underway on the day of the tour. If the land is secured, and if the project is approved by the City of Surrey government, and if the structure is built and opened on time, and if the units sell at the target price, we were told that investment partners would earn an 18 to 20 per cent annual rate of return from 2018 to 2023. That’s the year when construction is to be completed and partner contributions paid back.

The front man for the development company is Dave Steele, and his company is the Western Canadian Properties Group, affiliated with Investment Revenue Realty Inc. He has a track record in single-family and low-rise development in B.C. and Alberta, and a partner who has 15 years of experience with bigger, name-brand companies. In a sit-down information session after the bus tour, he did not oversell the risks or the rewards of his crowdfunding approach. “You’re betting on us to execute the project,” he said.

Is this a wide investment? On the upside, the projected 18+ per cent rate of return is better than the 0.80 per cent that I am currently earning on bank savings, and re-zoning approval from the City could drive that return even higher.

On the downside, the demand for new housing in Surrey may collapse. The investment fund would be put on hold, with no return for the investors.

Of course, it’s hard to imagine a market collapse in north Surrey, with its access to transit and its growing employment base, including two new university campuses. The price of apartments in Surrey, Steele said, is $750 per square foot, compared with $1300 at Metrotown in Burnaby and $2,000 in central Vancouver. There’s strong demand for apartments in Surrey, starting as small as 400 square feet. We drove past a residential construction site called the King George Hub, where Steele said 4,000 people had submitted applications to purchase 443 units when the first phase of the project came on the market last year.

At least a couple of the passengers on the bus stepped forward to put their money down. I decided to stand clear, for no other reason other than my past inability to read markets. However, I’ll make three observations in my blogger persona.

First, the redevelopment proposal conforms to the familiar, and unfortunate, pattern where modest rental housing in Metro Vancouver is to be replaced by relatively expensive condo apartments, with no plan to provide for the evicted tenants. In this case, the target for replacement is the 1960s-era Elizabeth Manor, with 57 units. “They’re just not building rental housing fast enough,” Steele said. “It’s a problem everywhere, and we have to get more rental housing built.” True enough; but there is no current thought to include purpose-built rental housing in Steele’s project.

Second, I saw no evidence that this was a tour for foreign investors or their agents. The people I spoke with were Vancouver-area residents like myself — people approaching retirement, looking for ways to top up their insufficient retirement savings funds. Dave Steele quoted a source who told him that of the 738 units in King George Hub, 697 went to people with B.C. addresses. He also guessed, based on what I do not know, that residents of his own Surrey Central development would be about 85 per cent owner-occupants and about 15 per cent renters.

Finally, this financing model could hypothetically lead to a situation where investors are the only members of the public who get the opportunity to purchase new housing. $25,000, invested at high risk, puts you at the front of the queue; but what if the queue for all new developments is made up entirely of people who are willing to invest money at high risk? 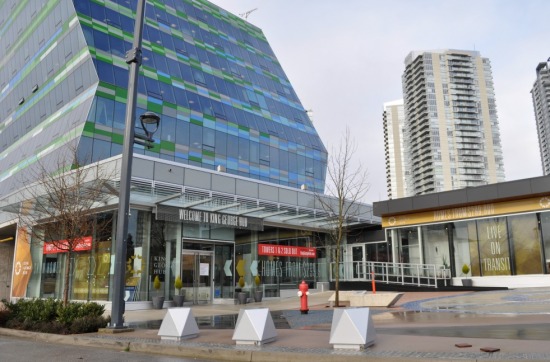 The show office for the King George Hub development, near King George station. The same building houses a regional office for Coast Capital Savings, one of Surrey Central’s new employers.