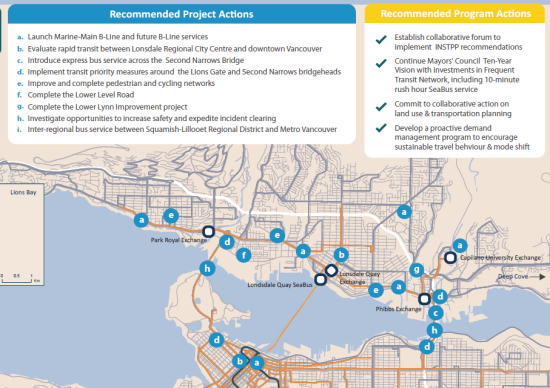 A detail from the 2018 joint agency report on North Shore traffic, with a bunch o’ recommendations on how to reduce congestion.

It seems Fraseropolis got it wrong in 2014 when we downplayed reports about traffic jams on the North Shore. I said that with almost zero population growth, an ageing demographic and improving transit, traffic volumes in North and West Vancouver should be subsiding. 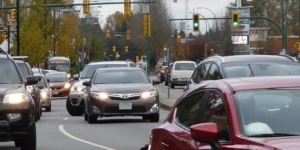 A photo used to promote a public forum on traffic, from the North Van Parks and Rec Commission.

However, a new report from a multi-agency task force points out that industrial and commercial development on the North Shore is drawing thousands of workers from across the Burrard Inlet, and heavy truck traffic is increasing as well. North Vancouver is now one of the region’s traffic hot spots, especially around the two major bridges in the afternoon rush.

“Employers have expressed their frustration and challenges with attracting and keeping employees who either must commute from other parts of the region on congested roads and bridges or make a long transit journey.”

The report’s recommendations and their mainstream approach might have been written in the 1990s, a decade when I worked in the provincial transportation ministry. My reading of the key points:

This traffic study initiative was put together by Bowinn Ma, a young and energetic New Democrat legislator from North Vancouver. Its modest conclusions are endorsed by North Shore municipal councils and First Nations as well as the regional transportation authority and the provincial government. At the very least, this should improve the chance that the proposed new roads and transit receive funding from regional and provincial budgets.

Inevitably, the “no quick fix” theme ignited outrage in the North Shore community news chat threads after the report was released in early September. Many critics demanded a third vehicle crossing of the Burrard Inlet. This was suggested as long ago as the 1990s by a few property developers, and rejected by the City of Vancouver, which does not want to receive more traffic. Even a one-lane widening of the Lions Gate was shot down  by the City of Vancouver. An alternative route, also floated in the 1990s (by Maple Ridge), would cross Indian Arm from North Vancouver to Port Moody and Coquitlam. This would encounter local opposition in the Tri-Cities and serve a very limited purpose.