Of all the Metro Vancouver suburbs, Port Moody has worked most diligently in the past 15 years to manufacture city-like environments, based on the expectation that rapid transit was coming soon.  Thousands of people are waiting for that first train.

NewPort Village, a pedestrian-oriented ring of retail shops and condos protected from through traffic (some might call it “Whistler-style development”) opened about 1997.  It’s been almost freakishly successful, attracting a cluster of residential towers.

More recently, development jumped to the west side of Ioco Road, where a kind of mini-Yaletown has sprouted up.  In 2009, however, Mayor Joe Trasolini imposed a moratorium on high-density development in Port Moody.  “The population in the last 15 years has doubled . . . we’re being criticized for growing too much without infrastructure in place.” 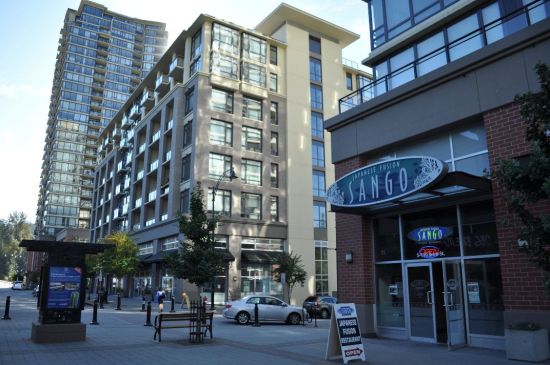 With renewed promises from the B.C. government that the Evergreen rapid transit project is about to launch, Trasolini — who is stepping down from politics — says it will soon be time to re-think the moratorium.

Port Moody’s towers are located within walking distance of either the future Ioco Road station or the future Port Moody station next to the West Coast Express commuter train stop.  Business groups have lobbied for the addition of a third Port Moody transit station in the city’s old downtown.  This effort has been unsuccessful to date, and it’s notable that no towers have gone up in the area. 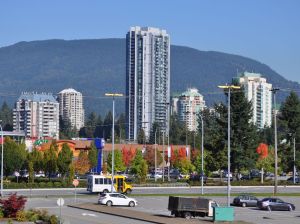 East of Port Moody, Coquitlam has also seen an eruption of towers in the past 15 years, oriented to the future Coquitlam Central and Douglas College transit stations.

The development pattern here is less chic, dominated by residential-only land use east of Pinetree Way and by the massive parking lots of the Coquitlam Centre mall between Pinetree and Johnson.  People are drawn here from across eastern Metro Vancouver for the “convenience” of one-stop shopping.  A walk from the perimeter of the parking lots to the middle of the mall and back makes for a round trip of 1.5 kilometres or more.

[2016 note: citations for “Trasolini moratorium” and “business groups lobbied for 3rd station” appear to have disappeared from the internet. Regrets.]