Burnaby’s “City of Lougheed” project, captured from a real estate site. The Evergreen Line enters from the right to join the existing Millennium Line.

Metro Vancouver’s Evergreen rapid transit line is set to open before the end of 2016. Planning for this SkyTrain link to deep Coquitlam started almost 20 years ago, and residential towers sprang up almost immediately near the proposed route, beginning with Newport and Suter Brook in Port Moody. The Coquitlam Centre precinct was rapidly densified and complexified through the 2000s. We recently saw the astonishing announcement of a 23-tower project at Lougheed Town Centre site in Burnaby, rising to heights of 65 storeys, with a potential for 11,000 apartment units. And it ain’t over yet. END_OF_DOCUMENT_TOKEN_TO_BE_REPLACED 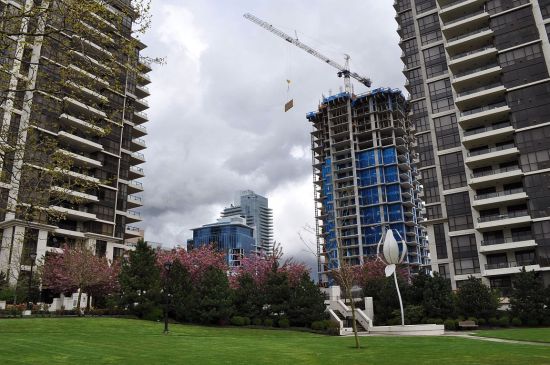 During the recent panic around transportation funding in Metro Vancouver, the authorities assured us that construction of the long-awaited Evergreen rapid transit line will proceed.  Preliminary work — street widenings, electrical ducts — is now underway, and a contractor is to be selected soon for principal construction,  scheduled to begin in autumn 2012.

But while the 11-kilometre line appears to have achieved untouchable status in the  balance of regional politics, there are persistent voices in the blogosphere who say the project is wrong, wrong, wrong, because it’s based on Skytrain — the obtrusive technology previously used in three other Vancouver-area projects, and hardly anywhere else in the world.  In deliberations over the Evergreen Line around 2006, local mayors seemed to be leaning toward light rail transit, until the provincial government declared force majeure and imposed Skytrain.  The same dynamic had played out, less dramatically, with the Millenium and Canada lines earlier on. END_OF_DOCUMENT_TOKEN_TO_BE_REPLACED

Of all the Metro Vancouver suburbs, Port Moody has worked most diligently in the past 15 years to manufacture city-like environments, based on the expectation that rapid transit was coming soon.  Thousands of people are waiting for that first train.

NewPort Village, a pedestrian-oriented ring of retail shops and condos protected from through traffic (some might call it “Whistler-style development”) opened about 1997.  It’s been almost freakishly successful, attracting a cluster of residential towers.

More recently, development jumped to the west side of Ioco Road, where a kind of mini-Yaletown has sprouted up.  In 2009, however, Mayor Joe Trasolini imposed a moratorium on high-density development in Port Moody.  “The population in the last 15 years has doubled . . . we’re being criticized for growing too much without infrastructure in place.” END_OF_DOCUMENT_TOKEN_TO_BE_REPLACED

TransLink, aka the South Coast British Columbia Transportation Authority, moves about 600,000 transit passengers on the average day in Metro Vancouver.  Forgiving the occasional breakdown, the corporation seems to have most of its technical issues sorted out.

But on the softer side – politics and financing – the outlook is uncertain.  TransLink’s operates as a unified agency in a fractured region.  Its funding requests are subject to approval by a council of 21 municipal mayors – and yes, this includes Anmore, Belcarra, Bowen Island and Lions Bay – plus a first nations chief.  If the mayors happen to agree on something, their decision is subject to further approval by the provincial government.  END_OF_DOCUMENT_TOKEN_TO_BE_REPLACED