Abbotsford is the largest city in the Fraser Valley Regional District.  It’s the product of a series of mergers, the latest being with the District of Matsqui in 1995.

The old Village of Abbotsford, like Cloverdale and Aldergrove, also described in this series,

was a stop on the vanished Interurban commuter rail line.  It’s been renamed Downtown Abbotsford, and the city government has taken steps to dress it up and attract customers…As described in a “Business and Industry Statistics” document that lived on the website when this piece was posted:

“Extensive efforts have been made to revitalize the downtown core, including tax exemptions, building improvement grants, downtown branding plans and a 20 year business improvement bylaw. Since 2003, over 50 businesses have located downtown and over two dozen investors have purchased property with a commitment to revitalization.”

A 2005 revitalization bylaw offers a property tax reduction to anyone who completes more than $100,000 in building improvements.  And the money is flowing, at least on a couple of streets, giving the area a fresher appearance than some of the other 1930s-vintage business areas in the region.

My co-tourist was Randy Rosner, who has lived up the hill in the Clayburn neighbourhood 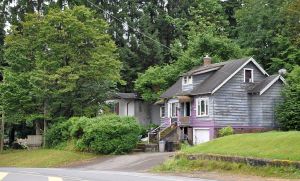 for more than 25 years. We ate at the Duke of Dublin pub and enjoyed the food and the service, but Randy says he doesn’t come into Downtown much. Despite the beautification of some shopfronts, he thinks of it as “poverty city,” a zone for criminal activity, and he showed me some decaying housing. And like a lot of our old downtown areas, social agencies are a prominent part of the landscape. [Note: the Duke of Dublin closed in 2013.]

Downtown Abbotsford has some of the ingredients for a happening urban village.  The transit system is fair, with three or four routes running through the village and the university bus running as often as every 15 minutes.  A demographic profile published by the City states that 40 per cent of the dwellings in the Central Area — the village and the streets to the north — are apartments (although only four per cent of the people walk to work.). Local schoolchildren have published a walking tour guide with 31 historic stops.  A group of young hipsters has taken over the upstairs of an old hotel and blog about it as the Atangard Community Project.

But for this tourist, at this moment, the core commercial area seems to lack critical mass, and the streets ringing the core are uncomfortably busy and fast.  My hope for Downtown, as with so many of these places, is that the city government and the business association will work to connect businesses with the people who live nearby — literally, through design changes, and socially, by facilitating shared initiatives aimed at improvement.  Too often, the combination of village shops and medium-density housing is regarded as a kind of weird accident, and the synergies available to a walkable neighbourhood are overlooked.

[This is post #10 in our Urban Villages series. By the way, the “urban village” is treated on this site not as a commercial area, but as a walkable mixed-use area centred on a set of services.  Livability in an urban village is a function of housing availability for a diversity of folks, public transit, civic amenities and incentives to walk and cycle as well as a range of commercial services.]