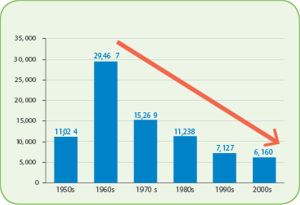 Just over a year ago we reported on an effort by the Metro Vancouver regional authority to push for a better federal tax environment for rental housing construction.  With the demise of Ottawa’s Multiple Unit Residential Building tax credit in the 1980s, and the retreat of senior governments from funding non-profit housing development, the rate of purpose-built rental housing construction has steadily slipped over time.  It’s clearly more profitable, under the current system, to build homes for sale.  The graph on the left, from a City of Vancouver document, illustrates the decade-by-decade trend.

This matters for a bunch of reasons. At the minimum, let’s say that 1) rental housing fills a need for low-income seniors, low-income workers, transient workers and young people, and 2) the existing stock is falling down from old age.

What has happened since my December 2011 post is roughly this:

In terms of action, we haven’t seen much that matters to Fraseropolis, except

for  significant steps taken by the City of Vancouver, home to about 25 per cent of the Metro Vancouver region’s population.  Other municipal governments (for example the City of North Vancouver) have talked about policy changes, but I see no evidence of anything concrete.  If I’m wrong, please let me know.

Vancouver built on a “Short-Term Incentives” pilot program that ran from mid-2009 through 2011.  It offered four  measures to tilt the market in favour of rental housing construction.  These included permission to build more units than the city plan would have allowed at the location in question; reduced development cost charges; reduced minimums on the provision of parking; and priority treatment for the processing of construction applications.  In a 2012 slide presentation (accessible from the City’s housing page) officials stated that the  program triggered a rise in the construction of purpose-built market rental units from 80 per year to more than 500 per year.  In response to this reported success, City Council voted in May 2012 to make the incentives permanent.

Councils in nearby municipalities have claimed their hands are tied because they don’t have the flexibility to encourage rental housing construction, or because the matter lies outside their jurisdiction.  The City of Vancouver’s decision seems to prove them wrong.

Of course I would like to see the federal government take a serious look at this problem. On a superficial level, the Conservative government has no reason to pay attention; it represents a coalition of rural and suburban interests, and the rental housing shortage is most acute in the inner city.  But look more closely, and you’ll see that the rental housing shortage affects seniors, and the disabled, and young people, and contributes to homelessness and associated ills, in places like Port Coquitlam, Maple Ridge, Abbotsford and Chilliwack, all of them currently held by the Harper Conservatives.   This would require a shift in attitude, to a more activist approach; is this too much to hope for?

[February 2 2013 note: Six days after this post, the City of Vancouver announced that it had approved more than 1,000 rental housing units in 2012, a record high; critics  complained that the new units are certain to be unaffordable.]