The City of Langley is one of those pocket-sized, hemmed-in British Columbia municipalities — like Comox, White Rock, or the City of North Van — whose only hope for new development is to densify.

This realization has come late to Langley City. The northern edge of the downtown area gives way to an atrocious patchwork of vacant and underdeveloped commercial and industrial lands. In response, the city adopted a Master Plan in 2009 and 2010 to expand the “realm of influence” of the charming core.

[The downtown perimeter] will contain dense mix-use development supporting the Downtown Core. Shorten pedestrian crossings and concentrate a similar, but distinct, high level of intervention, furniture and pedestrian amenities in these areas. Incorporate sustainable initiatives including greening the streets and rain gardens.

Langley Prairie 100 years ago, from the City’s downtown plan

I visited Langley City with my co-tourist through life, Vicki McLeod. She lived here when she was small, in a rural town where the biggest commercial operation was a cattle auction on the main street. She played in open fields and woods, and attended a four-room elementary school called Langley Prairie that no longer exists; the family names of some of her classmates can still be seen on the retail signs along the high street. She wouldn’t want to live here now, she says; “too many ghosts.”

We walked into the downtown core from in front of an apartment building where Vicki lived after she left home. She worked as a hostess and bartender at Dino’s Restaurant, now gone, on the overnight shift. The drunks would pour into the place to order pizza and lasagna after the bars closed. She made good tips.

The commercial heart of Langley City remains strong. Its business association reports over 300 members, and we saw few vacant spaces. Langley City presents a more robust downtown than we have seen in Mission, or Cloverdale, or in our home town of Maple Ridge. I can only guess that there is a more entrenched local retail community here, a much larger pedestrian population in the surrounding walkable area, and a city government that has few options outside its downtown.

A new public space off the high street, part of the ambitious downtown plan.

In fact, although the northern perimeter is grim, this village in the outer suburbs appears to offer a offer range of services and a quality urban lifestyle, if you are prepared to navigate the traffic on the wide arterial roads.

The municipal plan makes use of the phrase “grey to green;” this refers in part, I think, to the effort to restore the northern perimeter to livability. It also catches the idea that while the northern limit of the village is (unfortunately) grey, the southern side is increasingly green, with new pathways leading into and through a park system along the Nikomekl River.

The quality of future development in Langley City will depend on the imagination and restraint demonstrated by future councils. There is talk of mixed-use development, of towers, of preserving the character of the high street. Realistically, we must expect some form of suburban compromise; even a modest expansion of the walkable urban core will represent a victory.

From the downtown plan; the crosshatched areas suggest redevelopment 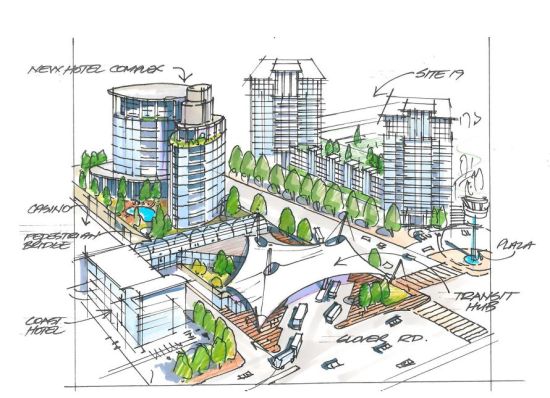 From the downtown plan