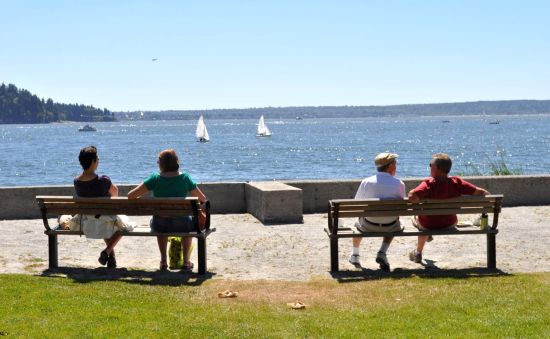 We parked on Fulton Avenue, at the top of the functioning Ambleside village, and  walked down towards the high street. We met a man carrying two small bags of groceries; he said he had lived in a nearby condo apartment for more than 20 years and loved the village, the services, the scenic waterfront, all of them close together. “Living here is like being on vacation,” he said. With slight drawbacks:  it’s rainier than the big city, and it’s hard to plan for shows or meetings in Vancouver because of the unreliability of the three-lane Lions Gate Bridge.

Ambleside is located in the City of West Vancouver, the most affluent municipality in Canada measured by income and probably by municipal revenues per resident. For example, spending on public library operations (as reported here) is three times as high as in much of the rest of the Lower Mainland. The public services available in the village (rec centre, seniors activity centre, public space for artists) are perhaps the best in the region; commercial services such as the garden centre and the storefront hardware are rarely seen elsewhere; even the quality of the commercial architecture is a step or two above the norm. 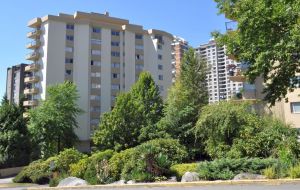 The City’s Ambleside area plan points that the village grew up in the 1950s and 60s almost in the shadow of the Park Royal shopping centre, one of the first and still one of the largest in the region. Rather than competing with Park Royal, it has found a different niche, despite the lack of a strong business association. The plan suggests the need for some adjustments rather than an overhaul. There is plenty of housing within walking distance, but there could be more housing in the core. The plan also sees the need for more retail services to replace financial and professional services at ground level. 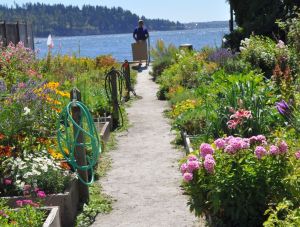 A community garden, Mr. Smarz and his new painting

My co-tourist, as often happens, was Mr. Robert Smarz of Surrey. We lunched at the Inn Cogneato Bistro, a mid-market kebab joint with the feel of an eastern Mediterranean tourist cafe. The artist’s gallery was open on the waterfront, and Bob purchased a local work.

This is a fine place to visit; our biggest complaint was the volume and pace of traffic on the high street, which I think could be mitigated (at least psychologically) with a median boulevard. It looks to be a place that caters to older and retired people, although not all of them are wealthy, judging by the Salvation Army thrift store discreetly lodged among the banks and boutiques.

A detail from the Ambleside area plan