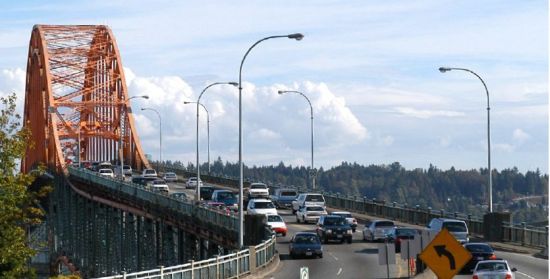 Replacement of the 1937 Pattulo Bridge over the Fraser River is part of the Metro Vancouver mayors’ long-term plan. The photo is taken from the plan document.

Vicki and I attended a luncheon last week to hear from advocates for a Metro Vancouver transportation tax. The tax proposal will be the subject a ballot going out to households in March.

In 2014, regional transit mayors issued a long-term plan for upgrades to rapid transit, bus transit, regional roads and HandiDart service. The British Columbia government responded that any proposal for new fees or taxes to support the plan must be tested in a referendum. (The parties use the term “plebiscite”, but the difference seems academic.)

With a minority opposed, the mayors’ council decided that the ballot will ask Metro Vancouver residents to approve a one-half per cent increase in the seven per cent provincial sales tax. This increase would be dedicated to transit and regional roads.

The lead-off speaker at the luncheon was Greg Moore, mayor of the City of Port Coquitlam and chair of the Metro Vancouver county authority. His presentation lacked clarity and punch, but he made some compelling points.

2) The planned 25 per cent increase in bus service hours will include the creation of new frequent express bus routes. The number of “B-lines” is to increase from three to 11, serving most parts of the region. New frequent bus service will target areas of new employment growth. Eighty per cent of the new jobs created between now and 2040 would be served by either rapid transit or frequent bus service.

3) The benefits of transit system expansion, even defined in the simplest way, are shared across the region. Fifty-two per cent of riders in the city of Vancouver’s Broadway corridor — reputed to be the busiest bus corridor in North America — come from outside the city. Four per cent, for example, come from Port Coquitlam, a smallish city far from the Vancouver city boundary.

4) TransLink, the transportation authority, already subject to regular independent audits and special audits, will be subject to a new public audit to ensure that the proceeds of the sales tax are channelled to the expansion plan. There will also be a new external  approval process related to the allocation of federal fuel tax dollars for transportation.

BC Chamber of Commerce CEO John Winter also spoke. He said a “no” vote will communicate to the provincial and federal governments that people in the Vancouver area don’t care about transit. And when the senior governments are asked to contribute to the next rapid transit project, they may ask: “Why should we?”

Both speakers emphasized that population, employment and traffic will increase significantly in the next 25 years in Metro Vancouver.

Won’t the increase in population translate into increased fares and property tax payments for the transportation system? Yes, fares already cover half the cost of transit, and revenues from fares and property taxes will grow, but it’s not enough. We’re becoming a more transit-dependent region. The next million people to set up households in Metro Vancouver will be far more transit-oriented than the previous million, by virtue of location, economics and preference.

The benefits from transportation investment are often diffuse. The flaws in Metro Vancouver’s system of transportation governance are acute. The TransLink brand is broken, and with voters eager to punish TransLink, a lopsided “No” vote seems likely. In some cases the reasoning is perverse; people who say their local service has been inadequate in the past are ready to vote against better transit in the future. A few critics have suggested that the system should be privatized; the result would be that the communities who complain most loudly about poor service would get no service at all.

A detail from the main map in the 2014 mayors’ plan. Elements here include new rapid transit in Surrey and Langley, and frequent bus service for Scott Road, Langley-Maple Ridge, Langley-Coquitlam and Vancouver-Simon Fraser University.