In a November 2015 post we described a possible route for the Arbutus transit extension in the City of Vancouver. This line would feature both high residential density and major employment nodes along much of its length.

Surrey’s light rail transit proposal, by contrast, traverses long stretches where current density is very low. As an example, this post shows something of the current state of the Guildford leg of the proposed Newton-to-Guildford “L” line. Fraseropolis associate Robert J. Smarz and the editor visited hypothetical station locations along 104 Avenue from Surrey Central to Guildford on a recent Saturday morning. 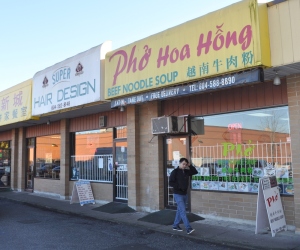 Waiting for redevelopment: ’70s-era retail next to Surrey Central station

Our tour suggests that for at least the first decade, the function of the trains on 104 would be to carry passengers from the Guildford Town Centre, which combines mall development with medium-density, to jobs at Surrey Central, or to Skytrain; and also to bring riders the other way, and support retail and commercial job growth around Guildford Town Centre. Much of the land between the two centres is undeveloped.

At the end of our walk, we had essentially travelled from mall to mall — from the Surrey Central mall, large but in need of refurbishment, to the Guildford shopping complex, larger (#13 in Canada) and slightly more sparkly. 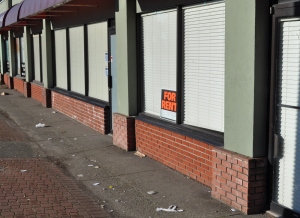 Vacant space in a struggling commercial building at 140 Street Station

As a photographic outing, this one is difficult. Some nearby residential streets are not bad, but visual interest on 104 Avenue is sparse. From Surrey Central to 140 Street, 104 Avenue is dominated by strip malls and automotive joints. The phantom 140 Street Station lies in a power line corridor, with only one of the four corners of the intersection currently developed.

Looking diagonally across the 140 Street intersection towards Surrey Central. The current land use where we are standing appears to be a Southeast Asian child care facility housed in a trailer.

The empty 104 Avenue Centre, Surrey, seen from 103A Avenue

Between 140 and 144 avenues we find an imposing four-storey office complex covering an entire city block. This development is reported to have sat empty since its completion 18 (!) years ago,  except for the presence of a security guard or two.

At 144 Street, the station site is more appealing at first glance than the 140 Avenue site. The Surrey Board of Trade occupies an office building near the northeast corner, beyond a gas station. The northwest corner has acquired a functioning shopping centre, commercial building and apartment building. 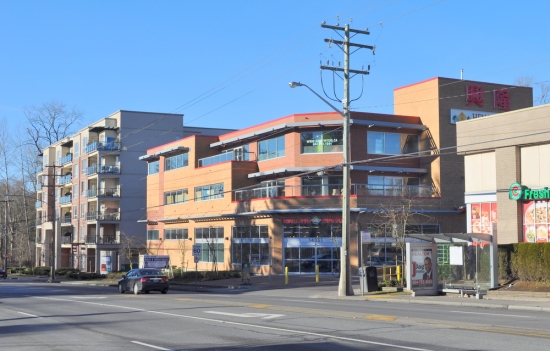 But here’s the thing: Most of the land north and west of the buildings pictured above is park or ravine, as far north as 108 Avenue. To the south, we have a four-block-deep zone of single family dwellings hemmed in by a very large (70 square blocks) area of park and ravine. In other words, much of what should be the pedestrian catchment area for the 140, 144 and 148 Avenue stations is green space. Aggressive development along 104 Avenue would eventually offset this, but the resolution of this customer shortage seems a long way off.

104 Avenue between 144 and 148 streets presents us with car sales lots on the south side and vacant or vacant-ish land to the north. A large supermarket sits 200 metres west of the 148 Street Station site, and there is housing to the east of 148 as shown here, including a couple of towers.

Beyond 149 Street we enter an urban landscape, with storefront commercial facing low-rise apartments, but this ambience vanishes quickly as we cross 150 Street and gaze over the seven-plus city blocks of parking that surround the Guildford Town Centre malls. The proposed terminus of the “L” line sits at the end of this well-paved prospect.

LRT terminus: 104 Avenue at 152 Street looking west. It seems likely that the LRT turnabout would sit on our right.

Our January 13, 2016 post on the City of Surrey’s LRT strategy brought two well-informed responses from opponents of light rail transit. Correspondent Brendan Dawe rejected my suggestion that LRT would help to build a walkable village-style environment around transit stations.

If [the train] is going at something approaching rapid transit speeds, then it’s outright pedestrian unfriendly – it’s a fast train going down the middle of a street. If it’s to be operated with the sort of priority over the street that makes practical use of the capabilities of rail transit, than it will require reduction in potential pedestrian connectivity by limiting cross walks and signal pre-emption.

This is a valid point, especially since the pedestrian experience on 104 Avenue (for example) is already uninviting, with high volumes of vehicle traffic and noise. The comment suggests at least three points for the City of Surrey and the regional transportation authority to consider: