During Canada’s recent federal election campaign, Prime-Minister-to-be Justin Trudeau promised funding support for transit in British Columbia’s Lower Mainland — “to extend rapid transit along Broadway to Arbutus, bring light rail transit to Surrey, and increase SeaBus service during peak periods.” It’s part of a commitment to invest C$20 billion in Canadian infrastructure projects over 10 years. This announcement may breathe new life into a transit project that, judging from online discussion, appears to have lost momentum over the past three or four years.

The proposed extension of Skytrain into the west side of the City of Vancouver has been on the books since the Millennium transit line was built in the 1990s. The Millennium line runs west from the Coquitlam border through Burnaby into Vancouver, ending abruptly near Vancouver Community College, almost at the dividing point between the east and west sides of the city. The western extension of the line would relieve pressure on Vancouver’s Broadway Avenue bus corridor, home of the limited-stop B-99 services that had 55,000 boardings per day in 2013.

The “Broadway line”, as the proposed Skytrain extension is sometimes called,  was originally promoted as a link to the University of British Columbia on the Pacific Ocean. By the time the region’s mayors published their investment plan in 2014 (rejected by taxpayers in a 2015 referendum)  the length of the new line had been cut by half, to about 6 kilometres, ending at Arbutus Street. It’s this truncated line that the federal Liberals have agreed to support.

The clearest definition of the project I can find, on a semi-defunct site pulled together by UBC students, actually has the new transit route following 10th Avenue, parallel to Broadway. This is a key cycling route, but less sensitive than Broadway in terms of potential construction impacts on car commuters, goods movement and businesses.  The illustration at the top of this post is taken from the student site. Along with co-tourist Robert Smarz, a respected Surrey accountant, I recently surveyed the 10th Avenue route from VCC to Arbutus. We deposited our personal vehicles in the mostly empty VCC parking lot on a Saturday morning, and started to walk.

Through its first leg, the phantom rapid transit line runs above ground parallel to Great Northern Way, which doubles as the western end of the Central Valley Greenway, a cross-regional cycling route. The first proposed station sits next to a new multi-university campus being constructed on the former Finning Tractor lands. The academic Centre for Digital Media is an early (and possibly temporary) harbinger of this development.

A community garden, part of a park built across the Prince Edward Street right-of-way

From the future Hybrid University site, the line takes a sharp turn south and dives underground, running under residential Prince Edward Street toward Kingsway and Broadway. At 10th Avenue it turns west again, remaining underground, coming to a transit stop that would serve the emerging Kingsway/Main Street urban village and its brew pubs.

10th Avenue has fine trees and heritage homes and churches on each side of its entire length. The “favoured option” for transit construction on the student site is to bore under the street, but who can say? A cut-and-cover option, as was used on the Canada Line in 2008-2009, would be less expensive, although messier and more controversial.

At Broadway-City Hall station next to Cambie Street,  passengers  would have the option to transfer from the 10th Avenue Line to the Canada Line — or would they? The Canada Line is an airport-to-downtown service built for the 2010 Winter Olympic Games. It carries more than a 120,000 passengers per day as of September 2015. Because its trains and station platforms are curiously small, some reports have suggested it is running close to capacity. Planned residential mega-developments up and down Cambie Street will add to the squeeze on the Canada Line, and it’s not clear how Skytrain passengers coming from Burnaby would find room to hop on.

Moving west from Cambie, we enter almost immediately into the Vancouver General Hospital precinct, including the BC Cancer Centre and the offices of numerous  agencies, associations and professional firms. Guesstimating from a non-too-precise 2013 report on the economy of the Broadway Corridor, there may be 20,000 people working in the VGH zone, making it one of the biggest employment nodes in the region. 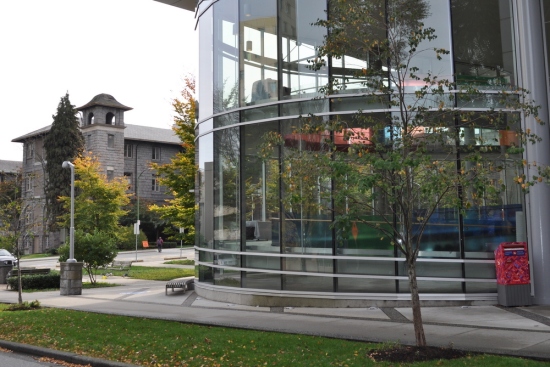 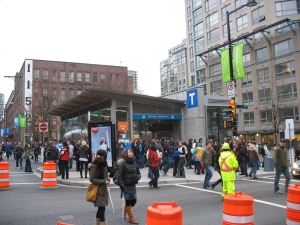 The location for a proposed VGH transit station near Oak Street isn’t obvious, but it has to be remembered that the line would run underground. All that’s really needed is a marked booth with space for a staircase and an elevator, like the existing Yaletown-Roundhouse Canada Line station shown on the left.

The final two proposed stations on the proposed 6-kilometre Arbutus extension are the “South Granville” stop, west of Granville Street, near the Vancouver School Board offices, and “Arbutus,” east of Arbutus Street. This is a densifying residential area, but the dominant reason for going  west to Arbutus is to shorten the heavily-travelled bus links to UBC. Arbutus Street also offers a dedicated north-south rail corridor owned by the Canadian Pacific Railway, land that could be transferred for local transit use in future — if CP and local authorities can agree on a sale price.

Residential construction, 2015, next to the proposed Arbutus transit station

In the opinion of our friend Mr. Smarz, the 10th Avenue line will never get built. Funding issues aside, underground transit construction through the Broadway corridor may be a lost cause.

In the early 2000s, efforts to get approval for rapid transit in the CP/Arbutus corridor were sensationally unpopular, and the west side of Vancouver continues to house many of the most affluent people in Lower Mainland. Bob’s hunch is that rapid transit expansion is more likely to take place above ground, from VCC to Finning; along Second Street to the Canada Line at Olympic Village station; and then along the old streetcar tracks to Granville Island, where UBC commuters will transfer to buses.