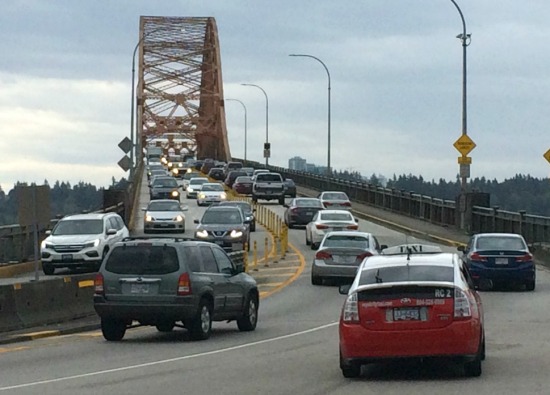 New Westminster within the region, from the New West Master Transportation Plan

New Westminster is at the crossroads of Metro Vancouver, with commuter traffic  pouring through from all directions and industrial zones in neighbouring cities around more than half its perimeter

The city government’s 2014 Master Transportation Plan reports 75,000 vehicles per day on the Pattullo crossing of the Fraser River, and 80,000 on the Queensborough crossing. This compares with fewer than 63,000 on the Lions Gate Bridge and fewer than 45,000 at the north end of the Massey Tunnel (provincial estimates for the same year.)

The Pattullo Bridge, opened in 1937, is crumbling, and must be replaced or closed within the next decade. The City of New Westminster and the regional transportation authority have wrestled for years over the scope of the replacement crossing; it now appears capacity will be held at the current four lanes, and tolls will be imposed to restrain demand.

City Councillor Patrick Johnstone remarked on the traffic issues in New Westminster in a blog post of October 9, 2016:

“There is a strange thing about traffic in New West: it mostly isn’t us. Two great statistics that tell you about our traffic problem is that the City has the highest percentage of its land dedicated to roads of any municipality in BC, and that New Westies drive less and own fewer cars per capita than the residents of any municipality in BC (with the exception of the City of Vancouver). Yet traffic is our #1 problem, because people like driving through New West. Presumably, they like it because they don’t have better options…”

Aerial view of New Westminster, from the Transportation Plan

In a recent interview with Fraseropolis, Johnstone elaborated on the problem. “We do some public opinion polling,”, he said, “and nothing else comes close to traffic. We have five SkyTrain stations, a pretty good bus system and complete neighbourhoods with good services, but so much of the walkability of our neighbourhoods is affected by those hours in the morning and the evening when there are too many cars on the road.”

New Westminster was British Columbia’s capital in colonial days, and it’s common to meet residents with four, five or six generations of roots in New West. It’s certain that some folks would like to see New West regain its former small-city charm, but that won’t happen. The population is projected to grow by 50 per cent before 2041, to surpass 100,000. New West is already in the process of transformation, with rapid transit and higher density bringing a young, artsy culture to the historic core and making downtown New West (in my view) a kind of Brooklyn to downtown Vancouver’s Manhattan.

So how to manage traffic? The 236-page transportation plan recognizes the need to keep industrial traffic flowing, but even so it proposes a target zero net increase in total traffic, whether generated internally or externally. Johnstone, a longtime cycling activist, is working with other members of New Westminster City Council to pursue this ambitious objective.

At the local level, city government and advisory committees are working block by block to reduce automobile use by making streets more friendly for pedestrians, cyclists and transit users. Johnstone notes that the 37-year-old mayor, Jonathan Cote, has installed a bike rack for use by the public in his official parking space at City Hall. “By 2018, every intersection will have curb cuts on the sidewalk, and 96 per cent of our bus stops that will be accessible. We’ve had some quick wins around bike routes. Safe routes to schools is something we’ve really worked on in the last couple of years… getting kids to school via active transportation. We’ve built pedestrian infrastructure, created better sidewalks and more accessibility, but we’re still facing a problem of too much traffic.”

Controlling the traffic arriving from outside is the big challenge. New Westminster will work to keep trucks and long-distance commuters on a few regional routes, and at the same time has asked the regional authority to remove some existing road sections — such as Columbia Street through Sapperton — from the regional grid. 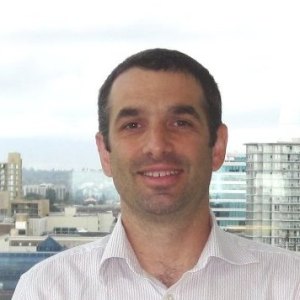 “We receive almost constant pressure from other communities to get the traffic flowing through New Westminster,” said Johnstone. “They see us as the problem. I look it the other way – we’re paying attention to what the regional transportation strategy and regional growth strategy say about how to build urban centres. Our city isn’t a freeway solution for neighbouring communities.”

“We’re not going to accommodate more traffic. We’re not going to support building large infrastructure that brings more traffic to our streets. The real change will come in the way we invest in transportation regionally. I would like to see the billions of dollars that have been taken to build bridges into cities that don’t want them, and have it invested in transit, especially south of the Fraser. And we have to stop thinking of transit as SkyTrain lines, and think of it as an integrated system. In 2016 we have been losing bus routes in New Westminster, and we’re one of the densest and most transit-oriented cities in the region.”

“[The City of] Vancouver drew the line on increased vehicle capacity a decade ago, and they’re seeing huge results in the way people travel through the city. They’re shown what can be done – and it hasn’t hurt their economy. Their biggest problem is housing costs, and that’s arguably a result of how livable they’ve made their city.”