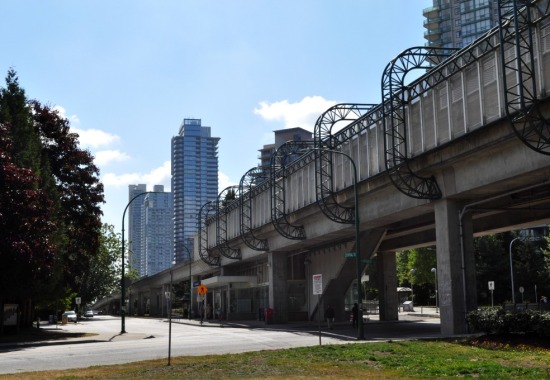 The City of Burnaby has adopted a new long-term development plan for the Metrotown district. By 2040, Metrotown is to be transformed by the redevelopment of its signature shopping malls into a “finergrained network of public streets, lanes, pedestrian connections, plazas, squares, parks, and open spaces.” Metrotown is to become a classic downtown core in a suburban city of 240,000 that has lacked a focus until now.

The July 2017 plan replaces a 1977 document that, visually at least, had a creepy, adopted-by-aliens vibe. The old plan facilitated the growth of the Metrotown shopping complex, Canada’s second-largest indoor shopping centre, along with a surrounding ring of apartment towers. The shopping centre is a busy place with an enormous variety of services, but it shows blank facades to the outside world. As I pointed out after my 2012 visit, the streets and concrete plazas around the mall lack life and colour.

Addressing this lack of urban character is a big part of what the new plan is about. The City wants more streetfront retail in Metrotown, better connections for pedestrians and cyclists, and more attractive public space. After some well-deserved criticism for its approach to rental and affordable housing issues, the City states in the plan that it will welcome rental housing anywhere in Metrotown, and offer incentives for the development of non-market housing:

“All sites with a residential designation, including applicable mixed-use sites, have the potential to include nonmarket housing, which is inclusive of non-market rental housing (public housing, non-profit rental housing, and cooperative housing), housing with supports (community care facilities, assisted living, and supportive housing), and transitional housing.  (co-op, non-profit or government-sponsored).”

A detail from the 2017 Metrotown plan. The dotted streets in Metro Downtown show what might happen if today’s indoor malls are removed.

The area described in the 2017 plan goes well beyond the big shopping centres, running east to Royal Oak, west to the City of Vancouver boundary, and taking in the kilometre-square Central Park. This Metrotown district houses an estimated 27,700 people, 62 per cent of them immigrants. The new plan contemplates the addition of high-density housing in the new downtown as well as in Maywood, on top of improvements that will bring culture, education, social services and tourism interest to the new Burnaby downtown.

My co-tourist Bob Smarz and I started our walk at the mall, spiralled south through Maywood and along the edge of Central Park to Central Park North. We returned along the Kingsway to lunch at the Firefighters Public House, which I have visited many times and always enjoy. The pub is owned by the International Association of Firefighters, and the servers receive the benefits of belonging to their own union.

Cafe umbrellas on the north side of Kingsway near Willingdon, August 2017

The Old Orchard Mall on Kingsway has valuable and accessible services as well as a valuable swath of pavement. The City plan fingers Old Orchard for redevelopment.

A 1950s duplex on Metrotown’s northern perimeter. 97 per cent of the households in the area live in apartments, 2 per cent in attached homes and 1 per cent in detached homes. 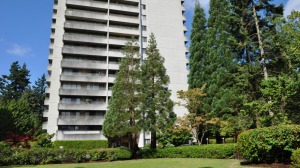 A pathway in Central Park, near Paterson Avenue

Holding for development on the north side of Kingsway near Paterson. Cash only please.

Maywood: as noted in a previous post, many walkup apartment buildings in this precinct are slated for demolition.