September 25, 2017 By imcleod in Planning and Development Tags: Brunsbüttel; suburban development in Germany Leave a comment

Garage entrance and back yard, Brunsbüttel

On a trip to Europe this month, Vicki and I stayed with friends in Brunsbüttel, a town of 13,400 on the North Sea. The town’s most notable feature is the entrance to the mouth of the world’s busiest artificial waterway, the Kiel Canal. Ocean-going ships sail past the eastern end of the high street on an hourly basis.

This pedestrian-cycling pathway also provides local  vehicle access to garages and laneway housing. The home on the right has solar panels on the garage and on the main roof.

Our friends are from southern Germany, but they own a retirement home in a newish subdivision on the northern edge of Brunsbüttel. They were among the first to build here in about 2002. Like its counterparts in similar-sized towns in North America, the neighbourhood is laid out in a cunning pattern of nesting crescents and dead ends to discourage vehicle traffic.

Unlike most places in North America, pedestrians and cyclists are offered a network of pathways, providing quick access through the neighbourhood and out into the town. However, in frequent walks over a one-week period I saw few people on the pathways, except for children walking or cycling to school, and a few adults walking dogs.

This is an automobile-dependent suburb, testimony to the powerful appeal of the detached home and the private garden. A random handful of home-based service providers display signs on their properties — a potter, a cosmetician, a speech therapist — and the industrial streets nearby feature a furniture store and a catering business.  I also found a mean-looking pub sitting alongside one of the minor roads out of town, a discovery that was news to our hosts.The supermarket and banks are 20 minutes south by the most direct pedestrian route. That’s too far, in North America or this part of Europe, for most adults to bother with walking or cycling. 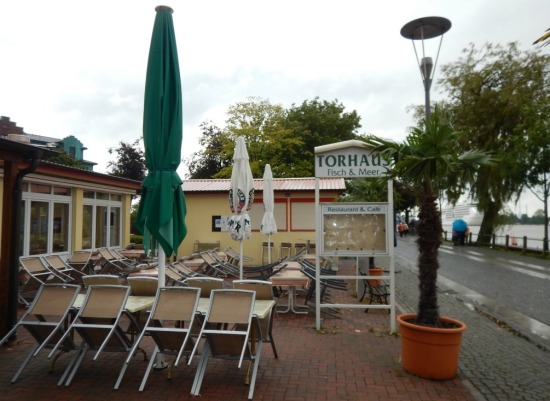 A rainy day at the entrance to the Kiel Canal in central Brunsbüttel, with a cruise ship approaching 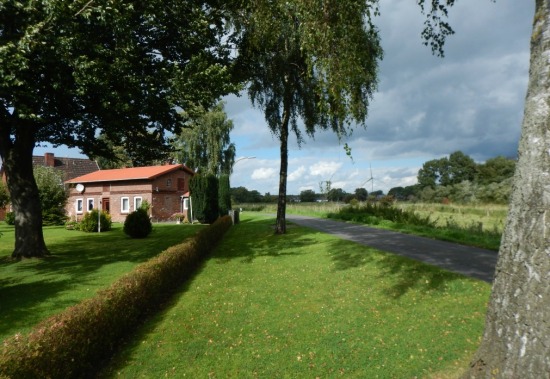 An older home at the edge of the subdivision, overlooking the Braake River and wind turbines sited on farmland. There are close to 1,000 wind turbines in Dithmarschen County, of the almost 3,000 in the province of Schleswig-Holstein.

Germany’s governments are strict in protecting agricultural land, but they have opened up occasional tracts outside the towns where small detached homes are packed into clusters, most of them (to my eye) lacking any kind of services. Residents can make use of off-road cycling pathways to travel safely into the urban areas, but again, we saw few cyclists in the hundreds of kilometres that we drove along rural roads.

During one visit to the canal and Brunsbüttel’s high street, the Koogstrasse, our host remarked that small businesses in the town are failing. People are shopping increasingly at shopping plazas with abundant free parking, or online. As in Nanaimo or Maple Ridge in Canada, long-established family-run shops in the central core are giving way to downmarket chains, fast-food outlets, gift and trinket shops operated by hopeful novices, and empty space.

A typical suburban street layout with a narrow road surface

The Anne-Frank-Weg, named for a prominent Jewish victim of Germany’s Nazi regime, is a pedestrian link from the subdivision to the high school and shopping

A residence with an industrial business attached, at the edge of the industrial zone