Columbia Street, showing the Sapperton area’s “Brewery District,” a nearly-complete development built on the site of a vanished industrial brewery. The head office of the regional transportation authority (TransLink) sits in the foreground. A new residential tower peeks out from behind. 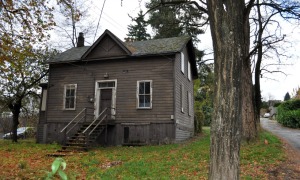 Sapperton, as defined in the City of New Westminster maps, is a long rectangle with no adjacent residential neighbourhoods to the east or north. With recent development, Sapperton has become more self-contained and livable; proposed further development would add thousands more residents at the eastern edge, with unforeseeable results.

As I drove to meet co-tourist Bob Smarz for a walk through Sapperton, an item on the radio reminded me that this is, in one sense, the birthplace of British Columbia. The Fraser Cemetery on the hill is the oldest in the Lower Mainland region: its dead include veterans of the American Civil War who moved to Canada, and presumably some Sappers, or British Royal Engineers, who landed on the Fraser River shore around 1860 to build B.C.’s first administrative capital. END_OF_DOCUMENT_TOKEN_TO_BE_REPLACED