Aside from ethnic enclaves, Vancouver’s Commercial Drive area may be the most distinctive urban village in B.C.’s Lower Mainland.  But its funky, quirky nature attracts visitors, and the visitors attract developer interest, and the developer interest may eventually erase the street’s one-of-a-kind character. 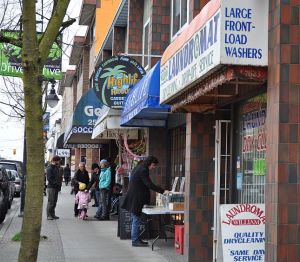 Once a largely Italian district, The Drive morphed during the 1980s into a resolutely downmarket ghetto for artists, thinkers and social activists. When the provincial New Democratic Party was ejected from government in 2001 and reduced to two seats in the legislature, Commercial Drive formed the centre line of the NDP’s remaining strength.

I toured the area with my sister Morna, who has lived near The Drive for 30 years.  We ate at the Cafe du Soleil; a change of management has left the humble menu as it was, but “at least the chairs match now,” she said.

Not surprisingly, the local community association is well-organized, and works with the City of Vancouver to permit cautious residential densification that respects the spirit of the neighbourhood.  Transit connections through Broadway Skytrain Station are excellent, and there are fine walks on the old side streets as well as commuter and recreational cycling pathways.

The range of public amenities and commercial and professional services available to residents is wide, although there’s an over-abundance of coffee places and hair salons.  The success of the cafes and bars reflects the fact that tourists and young people like to visit The Drive just to hang out an watch the parade.  However, the high volume  of  pedestrian traffic has also attracted a few national chain businesses, like the Flight Centre that took over from a local travel agent, and a mid-size “Mr. Pet’s.”  My sister and her peers fear that Old Navy and other suburban-mall type outlets will follow and squeeze out the local merchants.

As it stands, Commercial Drive works well as an urban village.  It gets marked down mostly for what the City and senior governments should be doing:  enabling more rental housing (see Fraseropolis for December 21, 2011) and, more easily attainable, reducing the flow of vehicle traffic on The Drive itself.  With plenty of north-south capacity on both Clark Drive and Nanaimo not far away, there’s no need to maintain The Drive as a primary arterial street.  It should be said that traffic calming features are common on nearby residential streets.

An area planning process is now underway to replace a 30-year-old community plan; this will no doubt address traffic and other issues.  Residents clearly have traffic on their minds; twice a year or so they organize a Car-Free Day to give pedestrians the freedom of The Drive.  Visitors flock in from across the region and, comically, create a parking and traffic panic.