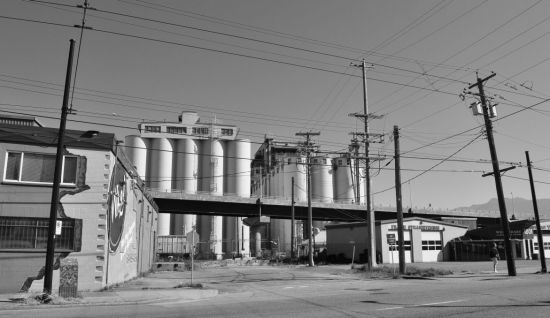 Vancouver writer Rolf Knight published Along The No. 20 Line  in 1980. It’s a book of working-class memoirs and oral histories about the Vancouver of the 1940s.

The title essay recalls a 1949 trip on the Number 20 streetcar through East Vancouver, from the intersection of Kamloops and McGill streets, near where the author grew up, to Cambie and Hastings, “the informal boundary of Vancouver East’s downtown.”

My sister Morna handed me the book in early 2014, and we agreed to walk the streetcar route together. It took us six months, with a heavy rain interrupting our first attempt. We used Knight’s work as a guide. Many structures he spotted on his trip still stand, although traffic, greenery and other aspects of the environment have changed.

The NDP Shaughnessy — Kamloops Street above the port

“You proceed down the aisle with a rolling walk, holding on to the stanchions, and slide into a grass-yellow, split rattan seat. There’s a sharp turn onto Nanaimo. Even at dead slow the car heels over on one side, leaning on its springs, coming about…”

“…from the vantage point of the No. 20 window you can look west — out over Wall Street a block below, out along the C.P.R. mainline curving around the base of the hill, down the tracks into the industrial waterfront.”

In 2014, the industrial waterfront is obscured by elevated roads, and pedestrian access is blocked for security reasons. On Powell Street, old apartment buildings and hotels that served the port are interspersed with newer industrial shops and warehouses, especially mini-storage warehouses. The streetcar, with its winding route, is gone; Powell now shoots commuter traffic directly through the lower end of gentrifying Strathcona and then through the Downtown East Side and touristy Gastown. 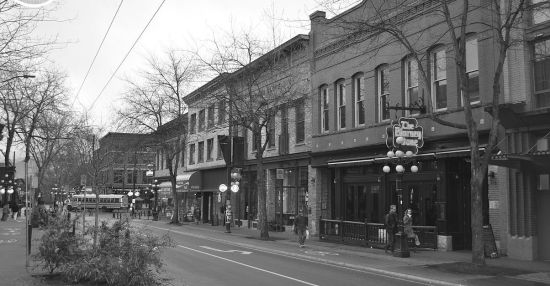 On the moving edge of Gastown: Carrall Street between Cordova and Powell

The old east side of Vancouver, like the rest of the city, is ever more expensive and trendy, but it has clung to its leftish inclinations. In the 2001 provincial election, when the New Democratic Party was eliminated in the rest of British Columbia, residents along the Number 20 line faithfully returned two NDP members to the legislature. I think of the Kamloops and McGill area as an NDP Shaughnessy, a shady, respectable retreat for well-paid trade union officials and a mirror of the elite neighbourhood on Vancouver’s west side.

On the day we got soaked in March, Morna and I ate at Kessel and March at the foot of Commercial Drive. Our friend the distinguished editor Gary Ross has asked everyone to avoid the word “uber”, so I will only say that Kessel and March is as trendy as a brunch place can be. And it’s pretty good, too. On our second outing we brunched at the Roundel Café on Hastings Street, popular with young-at-heart folks in the recently-branded East Village.

As I post this, Along the No. 20 Line is available in a second edition from the original publisher, New Star Books. The advertised cost is $24.00.

Much-renovated cottage housing on Wall Street, near where Rolf Knight grew up