With a population of 234,000, Burnaby is the third-largest city in Metro Vancouver and in British Columbia. It has no single centre. City Hall sits in science fiction isolation beside tranquil Deer Lake and its park. Commercial and residential growth is focused in “town centres,” three of them anchored by enormous shopping malls: Brentwood, Lougheed and especially Metrotown.

Edmonds, a fourth town centre, is the runt of the litter. I travelled there to measure its shape

and size in summer 2014,  landing at Greenford Ave. and setting out along the south side of  Kingsway. Other than a block of shops on the north side, Kingsway seemed kind of a mess, mixing automotive lots with ageing towers.

I held out hope that Edmonds Street, narrower and quieter, would offer  more charm. The intersection of Edmonds and Kingsway was the site of the first Burnaby municipal hall, built in 1899 when this was still a rural district. Edmonds Street, five kilometres east of Metrotown, has the makings of a village shopping street, supported by decent public transit and a stock of nearby walk-up apartment buildings. 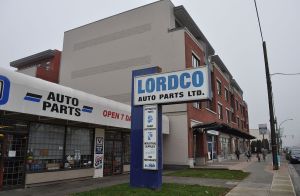 Edmonds Street: Mixed use vs automotive

But Edmonds Street made no sense to me during my summer visit. It has 1960s single-storey storefront space, some of it in poor condition; 1970s strip malls;  automotive shops; a two-storey  office block striving for elegance; and a couple of attempts at residential-commercial mixed use. A dentist here, a tattoo place there, but not enough services to grow a walkable village. 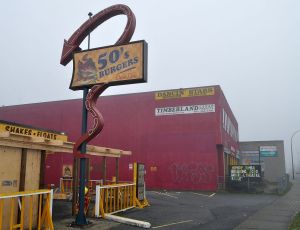 The municipal website provided no guidance. There’s an Edmonds rapid transit station, and an Edmonds provincial electoral district, but is there an Edmonds community? The Edmonds socio-economic study area covers Edmonds Street and its surroundings east of Kingsway.  The Edmonds Town Centre,   defined in a development plan adopted in 1994, takes in a different area, dominated by areas west of Kingsway.

Recently completed mixed-use complex next door to the unidentifiable structure

The story behind this contradiction became clearer on my second visit, in late January 2015. Edmonds Street, site of the would-be village, has been stranded by the placement of the “Edmonds” rapid transit station a kilometre south of the old neighbourhood. That happened in the mid-1980s. The 1994 municipal plan attempts to bridge the old rural street and the station precinct by establishing towers along the Kingsway corridor. On old Edmonds Street at Canada Way, I asked for the nearest supermarket. I was directed to the Highgate development, a vigorous fifteen-minute walk across an urban tangent.

The route from Canada Way to the supermarket took me between the New Vista towers, a ’70s-vintage social housing development for seniors. The modern Town Centre boundary (see the 2014 map)  is just beyond, at the new Edmonds community recreation centre, with its concrete yard and an extensive green park under renovation.

I saw a block of carefully protected ’80s detached homes, two blocks of older walk-ups, and then new residential towers, followed by the Highgate shops, now the true Edmonds centre; its main entrance, or most decorated entrance, is on the residential tower side. The bricked streetscape here is a bit like the manufactured streets of Port Moody’s Newport. The far side of the development looks out on busy Kingsway.

For many years, the older apartments off Edmonds Street  have been a receiving zone for new immigrants. The health authority has a New Canadian Clinic nearby. Most faces on the street are Asian or African, as are many of the businesses in the deteriorating spaces on Edmonds and further east on Sixth Street.

So in a different world, Edmonds Street might have been a multi-ethnic shopping area of regional interest. Instead, it’s tattered and inconsistent,  and  local residents will walk or drive to Highgate, with its 38 listings including the immigrants’ 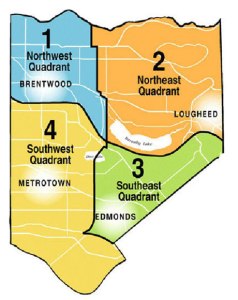 clinic, or to one of the bigger malls.

Messy or otherwise, the urban area in the 500-metre radius around Highgate offers the components of a successful urban village. There’s old housing, new housing, and seniors’ housing. Transit buses will run you to Metrotown, Canada’s second largest concentration of retail outlets, as often as every seven minutes, and there is a fine library near Edmonds and Kingsway. And at the same time, there is a sense of “what if.”

Entrance to the Highgate shopping area from the residential side, looking toward Kingsway. 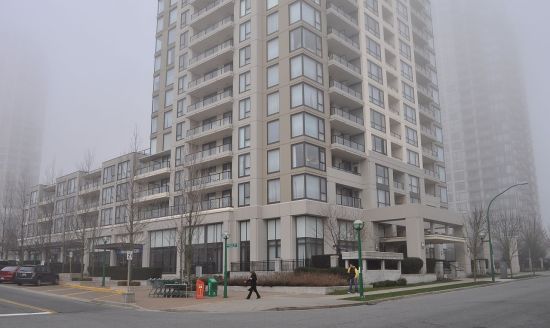 A rendering of the Highgate shops and towers as seen from the Kingsway side, from the Bosa Properties website (bosaproperties.com)