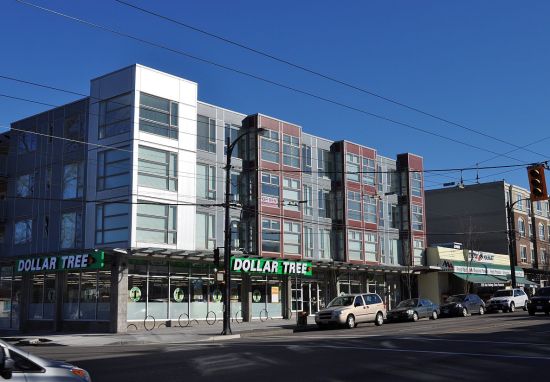 Vancouver’s Hastings Street east from Templeton Street is seeing rapid change. Ageing one-story shopfronts are going down in favour of four-storey complexes like the one pictured above.

I walked through here recently with my sister Morna, who has lived close by for more  than thirty years. The big fruit and vegetable stores are hanging on, but the Italian deli is gone, and the shoe stores. Instead, the trend is to latte bars and niche veterinary practices. It’s becoming more like Kitsilano, an affluent and sought-after quarter over towards the University of British Columbia.

This commercial strip, with a bit of Hastings further west and some industrial properties on the north side, has been rebranded as “The East Village.” The local Business Improvement Association website promises A real neighbourhood / A long heritage of cultural diversity / A community that means business / The heart of East Van for over 100 years / At the crossroads of the lower mainland

To be honest, though, the BIA map does not show a  neighbourhood. It shows a busy, noisy section of Hastings Street  coupled with a dozen industrial blocks looking down on the Vancouver seaport. The reasons for marrying commercial and industrial are unclear; perhaps it helps spread the cost of funding security patrols. To muddle our story further, The East Village spans two neighbourhoods, by the City of Vancouver’s official definition: Hastings Sunrise on the east, from Renfrew to Nanaimo, and Grandview-Woodlands on the west.

Judging from comments attached to a January 23, 2013 Globe and Mail report on the rebranding, the emergence of The East Village was not welcomed by all residents. Folks were used to calling their area Hastings Sunrise, or East Hastings. A colleague of mine said recently,  “They just wanted to get rid of the word Hastings, because it makes people think of the Downtown East Side.”

In any case, there is a village in here somewhere, distinct from either Sunrise or Grandview-Woodlands; it’s just not very clear how far it goes, or how far it’s going. 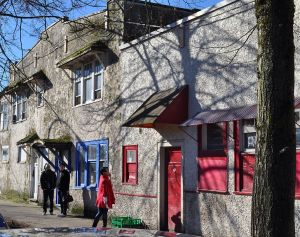 Townhomes (left), early 1900s. The building on the right houses the Red Wagon café, and people are lined up outside for brunch.

Inner-city Vancouver has the biggest concentration of poverty in British Columbia. The detailed child poverty map mentioned in a recent post shows the Downtown East Side’s black shading extending to the northwestern intersection of Hastings and Nanaimo, in the centre of the East Village. People in this rental-apartment zone are part of the real East Hastings village, but it’s unlikely that they’re the prime target of the BIA’s marketing plan.

The detached homes to the east and south of the rental zone, meanwhile, have doubled in value in the past five years and are selling for close to a million dollars each, judging by recent stats from the Greater Vancouver Real Estate Board. Does this mean that homeowners in the walkable perimeter around the East Village are getting more affluent? Maybe; but then again, some newcomers will be struggling to meet their mortgage payments. Either way, it’s pretty clear that the number of residents in this perimeter is not rising, and this poses a challenge to the high street merchants.

A 2004 Hastings Sunrise “visioning” report suggests that the City planners who worked with residents failed to get support for any residential densification whatsoever — not for duplexes or townhouses, not for multiple suites in houses, not for mid-rise apartments on arterial streets. And in this case, it appears the City government paid attention. Within the walkable-to-East-Village area of Hastings Sunrise alone, we are talking about more than fifty blocks almost entirely given over to detached housing, albeit with some secondary suites.

So how can East Village business people attract new customers? They will track the changing profile of people living in nearby detached homes, to see if they can get a bigger share of their attention; they’ll encourage apartment development in the narrow strip along Hastings Street, even if the four-story Kitsilano style is getting boring; and they’ll encourage consumers to drive into the village from outside the walkable zone. Motorists will develop less awareness of the full range of services than pedestrians do, and they’ll be less loyal, but who am I kidding: Canadians drive everywhere to shop or attend appointments, and marketing to motorists has to be part of the mix.

Apartments over a used-car showroom, Hastings Street, at the western end of the East Village