For more than a generation, historic Fort Langley has evolved as a day-trip destination for people in eastern Metro Vancouver and the Fraser Valley. It features a walkable main street of coffee shops and art galleries, built alongside an 1840s-era  national historic site.

In recent years Fort Langley has taken a leap forward in both liveability and visitor interest. The Bedford Landing riverside development, shown in gold on the map to the left, includes an inviting walking trail system and new commercial and cultural space. The emergence of Bedford Landing and smaller developments has pushed the Fort Langley population up from the 2,700 maximum contemplated in the 1987 area plan, to something over 3,700, going by the municipal estimate.

The Fort Langley Community Hall, often used as a backdrop in film and TV. Photo from the website of the Birthplace of B.C. Gallery, located just south on Glover Road.

The higher population and continued tourist traffic is driving the growth of business — with new gift shops and clothing boutiques, and, more important to residents, a wider range of personal and professional services. I would guess that accountants and  doctors moving into the area are setting up shop close to home, and attracting customers into the village from adjacent suburbs.

As suburban residential locations go, Fort Langley is highly desirable for those who can afford it. A 2014 municipal staff report [quoted in the Langley Times, link now lost] states that Fort Langley has the highest proportion of high-income households of any neighbourhood in the Township of Langley, with 19 per cent collecting more than $150,000 a year; and the lowest proportion of low-income households, with just five per cent living on under $20,000 per year. Factors in this imbalance would include the cost of housing and the lack of social and community services. 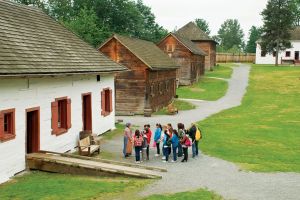 As we ate at The Lamplighter on Glover Road, my co-tourist Vicki and I wondered why Fort Langley has succeeded as a walkable arts and tourism quarter when other  outer-suburban villages (Mission City, Maple Ridge, Abbotsford)  have tried and failed. There is the historic fort, of course, but if Wikipedia is correct (1,200 visitors per average week, including schoolkids) this can’t be the only explanation. There are also aesthetic design controls, a riverside location…and significantly, a lack of visible poverty.

It makes sense for local governments to locate social housing and social services within walkable villages, but the presence of homeless and marginalized people creates tensions with merchants and customers. A Maple Ridge council candidate told me some years ago that she avoided the city’s downtown because she couldn’t stand to look at homeless people. Concerns around transience, street addiction and crime and dominated the 2014 election in Maple Ridge (2014) and may have led to the defeat of the incumbent mayor. Fort Langley, through location and planned exclusivity, has  avoided this kind of messy controversy.