The latest announcement on transit from Metro Vancouver mayors is their first major effort to regroup since voters shot down the idea of a transit sales tax in 2015.

This matters because the mayors and British Columbia’s provincial governments have been deadlocked for years on how to fund transit, and demand for service has outrun supply on key routes. Affordable public transit supports labour mobility, educational opportunity, independence and self-reliance for seniors and teens, and growth for pedestrian-focused urban villages, and it also reduces the number of cars on the road. END_OF_DOCUMENT_TOKEN_TO_BE_REPLACED

The University of British Columbia and health authority partners recently published a snapshot of transportation habits in Metro Vancouver based on an online survey of more than 28,000 people. 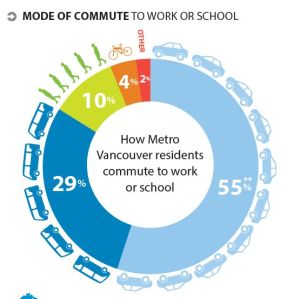 Among respondents, 29 per cent said they commute by public transit, compared with 55 per cent who travel in personal vehicles. A high-level map suggests that transit use is above average in tower-dominated Skytrain nodes and in many urban villages, even remote spots like downtown Langley and  downtown Maple Ridge. END_OF_DOCUMENT_TOKEN_TO_BE_REPLACED

As noted in my September 15 post, Metro Vancouver’s transportation authority is looking for ways to scare up an additional $70 million per year for service expansion.

In the current proposal, a 2 cent lift in the regional fuel tax is supposed to cover $40 million of this.  But in a presentation in Maple Ridge, TransLink CEO Ian Jarvis cautioned that the motor fuel tax may not be the reliable cash cow it used to be; and in the foreseeable future, fuel tax revenues may drop.   END_OF_DOCUMENT_TOKEN_TO_BE_REPLACED